Android 11 is the new talk of the town, at least for those enthusiastic enough to keep an eye on every new release, beta or stable. Naturally, many Xiaomi fans are eager to know if and when their devices will receive Android 11 update.

Google announced the first developer preview version in March and has since released the first public beta version. Unlike the former, the latter can be used by anyone willing to test the waters ahead of the stable release probably beginning September.

But being an unfinished version of the OS, access to this firmware is still limited to a certain group of phones from various device vendors. Google, OnePlus, OPPO, Vivo, and Xiaomi already have devices in the program and in this article, we keep track of the latter’s progress, be it beta or stable releases.

Last year, Xiaomi enrolled the Mi 9 and Mi MIX 3 5G into the Android Q beta program. This year, more devices are taking part in the early beta testing program, meaning they already have access to the latest Android 11 Beta 1.

Below is a table showing all Xiaomi smartphones that have received the beta or stable update to Android 11. We will continuously update the table to reflect the latest changes whenever a new device picks up the OS, again, beta or stable.

For an idea of Xiaomi devices that are likely to be upgraded to Android 11, probably beginning later this year, check out this article.

After making the update available for manual installation, Xiaomi is now rolling out Android 11 beta 1 to the Mi 10 and Mi 10 Pro over the air but still limited to the beta channel.

A Mi forum moderator has confirmed what we already expected – that the Mi A2 will not be updated officially to Android 11. See the full story here.

The update to Android 11 is coming soon to the Poco X2. See the full story here.

The update to Android 11 will not be made available for Redmi 8A owners, at last not in an official capacity. See the full story here.

We have some terrible news for Xiaomi Mi MIX 2S owners regarding Android 11 update. Apparently, this device will not be updated to the new OS, at least not officially. See the full story here.

The Redmi Note 9S comes preinstalled with Android 10 and hence eligible for at least one major OS update to Android 11. But just to clear the air for the doubting Thomas, Xiaomi has added some weight on the matter. See the details here.

Xiaomi has also revealed that the Mi A3 Android 11 update will bring support for native screen recording. Head for here more details.

Responding to a concerned Redmi Note 8 owners, a member of the Mi Device Team in the Mi forum has revealed that details about the update to Android 11 are still unavailable at this point in time. See the full story here.

The Redmi K30 Pro is now receiving a new Android 11 beta update. This new update is rolling out as version 20.7.30 and does not bring any major changes. Instead, it brings several bug fixes and optimizations. See the full story here.

Xiaomi has now issued a list of smartphones from its portfolio that will be getting the Android 11 update. The first set of Android 11 stable updates will come along with MIUI 12 and are due to be released in September. See the full story here.

The Xiaomi Redmi Note 9 may get the Android 11 update later this year according to a moderator on Mi Community. However, it will not get a dedicated Android 11 beta, instead, it will get Android 11 via an MIUI update. Check out more details here.

Many Xiaomi users are frustrated after coming to know via an unofficial list that devices such as the Redmi Note 7 Pro and Redmi Note 8 Pro will not be getting the Android 11 update. For more details on the matter, head here.

Xiaomi Mi CC 9 Pro has recently started receiving Android 11 beta update in China. It is worth noting that the update is currently meant for testers only, it is still available for anyone interested to download and flash this update on their Mi CC Pro. Read the entire story here.

IST: 03:05 pm: We have reported earlier that Xiaomi is running Android 11 internal testing programs for several devices that are eligible for the update. According to recent information, Xiaomi is working on Android 11 for a few more devices to the likes of Redmi Note 9, Note 9 Pro (global), & Redmi 9A.

It is worth noting that the information is not coming from our trusted sources, and hence, we cannot verify its credibility at this time. Read the full story here.

IST: 08:05 pm: Poco F2 Pro users are still waiting to get their hands on the beta for the upcoming Android version. A user recently took to Mi Community Forum to know when to expect the beta version of the Android 11 for the Poco F2 Pro.

Responding to the user, the moderator has mentioned that the Android 11 beta (AOSP) build has been released for the Poco F2 Pro. Read the full story here.

IST: 04:30 pm: A Mi Community moderator when asked of the Android 11 beta testing on the Redmi Note 9 has responded that once Google releases Android 11 officially, eligible devices may get beta testing based on MIUI soon after. 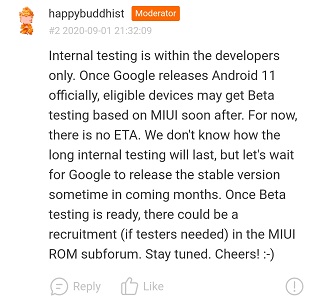 IST: 04:40 pm: Xiaomi seems to be dropping out the Mi Note 8 and Note 8 Pro from their Android 11 roadmap. This seems obvious from a Mi Community mod who recently confirmed that both devices are not eligible to get the next big OS update. Read the full story here.

IST: 13:47 pm: Its now coming to light that Xiaomi may be planning to take a non-China-first approach in the rollout of Android 11. Meaning, other ROMs (Global, India, Europe, Russia, and Indonesia) may come before the update goes live in Xiaomi’s home country. Here‘s the complete story.

IST: 15:10 pm: The beta testing for Mi 10, Mi 10 Pro, and Poco F2 Pro is likely to begin soon, as the first list of users who applied for testing the Android 11 beta update has gone live.

IST: 18:30 pm: As per an unofficial updated list, Android 11 internal testing has begun on Mi 10 Ultra and Poco C3 (rebranded Redmi 9C that is yet to release). Poco M2/Redmi 9 Prime has been added to the list of the confirmed devices, while Redmi 10X 4G/Redmi Note 9 has been taken off of it. Details here.

IST: 18:30 pm: An unofficial leist of Xiaomi devices that are not eligible for the Andorid 11 update has surfaced. Route here for more infomation.

IST: 12:00 pm: Many users who have applied to take part in the Android 11 beta program have not provided some necessary information. Therefore, an alert has been issued on the official Mi Global Community Telegram group. Head here to check it out.

IST: 06:24 pm: In response to a user’s query regarding the availability of Android 11 on the Mi MIX 3, a moderator stated that it’s too early to know whether the update will arrive on the Mi MIX 3 even though it’s technically eligible for the update. IST 06:15 pm: According to information shared via the Xiaomi & MIUI News group on Telegram, it appears that the Redmi K30 5G and the Mi 10 Youth Edition picked up the Android 11 beta update alongside recent MIUI 12 beta version 20.9.8. See the full story here.

IST 01:23 pm: Xiaomi has released the Android 11 beta update with MIUI 12 on top for the Global variants of the Mi 10 Pro. The new update is being rolled out to users who signed up for the beta program as version 12.1.2.0.RJAMIXM. For more details, head here.

IST 06:25 pm: Xiaomi has officially announced the release of the Android 11 beta update for the standard Mi 10 as well with the MIUI 12 Global Beta Stable ROM version 12.1.2.0.RJBMIXM.

IST 05:20 pm: Thanks to a custom ROM developer, Redmi K20 Pro users can now try out Android 11 in the form of an AOSP custom ROM for the device. You can check out and download the ROM by heading here.

IST: 02:35 pm: Xiaomi Mi A3 users will be disappointed to know that the Android 11 update for the device may not be coming anytime soon as a moderator stated that there is still no ETA for the update on the device.

IST: 11:20 pm: A new announcement states that some devices including the Poco X2 have been suspended from the update v20.9.21 due to the major Android version being upgraded. This hits that Xiaomi might soon release at least the Android 11-based MIUI 12 beta stable update for these devices.

IST: 11:41 am: Poco F1 and Mi A2 users who don’t want to wait for the official Android 11 build can now try out the new Android version thanks to the ReloadedOS and POSP (Android 11) custom ROMs respectively. Head here to know more.

IST: 12:21 pm: In response to a user’s query regarding the availability of Android 11 for the Redmi Note 8, a mod has now stated that the device will not get Android 11. Although it will continue to get Android 10-based updates. See more details here.

IST: 06:48 pm: The Xiaomi Redmi 4X released with Android 6.0 Marshmallow onboard and only received the update to Android 7.1.2 Nougat. Luckily, Redmi 4X users can taste Android 11 on the device via the AOSP-based Revenge OS custom ROM. Download it here.

IST: 12:47 pm: In the second session of #POCOAMA, the company heads have confirmed that the Poco X3 will get definitely get the update to Android 11, however, it’s unclear whether it will get Android 12. Full story here.

IST: 06:42 pm: An alleged list of Android 11 eligible devices from Xiaomi has surfaced once again with a few new devices along with information regarding the status of Android 11 for certain models. Head here to check it out.

Next article Xiaomi Mi A3 is getting new Android 10-based update, what do you think about it?