The Poco M3 is easily one of the most appealing smartphones available at its price point. The device’s textured rear cover not only gives it a luxurious appearance but also keeps it smudge-free and quite grippy.

But among the rest of its cool features, the thing that stands out the most is its ginormous camera module that may be dismissed as a design gimmick by some, but still undeniably has an odd appeal to it.

The design isn’t the only cool part of the device though as it also comes with some pretty compelling specs for its price including a large 6000 mAh battery, 48 MP camera, and a Snapdragon 662 processor. 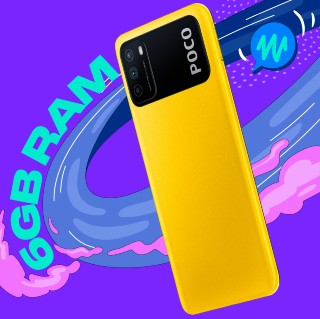 However, there is one issue that has been bothering every Poco M3 user that actually keeps track of updates. You see, the Poco M3 was launched back in November last year and came with Android 10-based MIUI 12 out of the box.

And almost eight months later, the phone continues to run on the same software it was launched with. Of course, it has indeed received a couple of security updates but that’s it.

Seasoned Xiaomi users are already aware that MIUI 12 and Android 10 is not the latest piece of software that the OEM has to offer. Most of its Android 11-eligible devices have already been updated to the Android version with several even being treated to MIUI 12.5.

Unfortunately, the Poco M3 has seemingly not received that much love from its parent company and has thus been left on the old and buggy MIUI 12.

With issues like weak Wi-Fi signal strength and more plaguing the software the Poco M3 is currently running, the demand for Android 11-based MIUI 12.5 has been ever-increasing.

Thankfully, a Poco community mod has now stated that the Poco M3 is going to receive Android 11 “very soon.” Of course, this is in no way an ETA, but at least we now know that the update is now closer than ever for the device.

However, one question still remains unanswered. Will the Poco M3 receive Android 11 layered atop with MIUI 12.5? Or will Poco continue to stick to MIUI 12?

Well, considering that even the most entry-level devices have now been updated to MIUI 12.5, at least in China, it is quite possible that the Poco M3 may give a miss to MIUI 12-topped Android 11 and directly hop on to MIUI 12.5.

But of course, that is only speculation at this point. Regardless, we will continue tracking the matter for further developments and will be updating our dedicated Poco MIUI 12.5 update tracker accordingly, so stay tuned.

Finally, Poco M3 users can rejoice as the company has started seeding the stable Android 11 update for the device in Europe. The new build — V12.5.2.0.RJFEUXM — brings the now year-old Android version to the device along with the MIUI 12.5 skin.

Unfortunately, we’re yet to come across user reports of the same.

The Stable Fastboot ROM for Android 11 based MIUI 12.5 has been made available for the Poco M3 users in Europe. This indicates that the wider release of the update is on the way. The Ascent Mutual Dependencies bug (unable to progress) acknowledged, fix in the works