At the event, Samsung revealed that the Galaxy Note 20 will receive three Android OS updates all through to Android 13. That’s some feat coming from Samsung, which has been offering two OS updates to all Galaxy devices regardless of the price.

This changes going forward. And even better is that the Galaxy Note 20 and Note 20 Ultra aren’t alone. If you own any of the devices in the Galaxy S20, Galaxy Note 10 and Galaxy S10 series, you are also guaranteed at least three Android OS updates. Yes, this means OS updates for the Galaxy Note 10 and S10 series wont stop at Android 11, rather, Android 12 is also on the cards. But until then, lets talk about the latest offering from Samsung – the One UI 3.0 update based on Android 11.

Regular PiunikaWeb readers probably have come across our list of Samsung Galaxy devices we think will receive the One UI 3.0 update. With new devices still expected in the near future, this list should keep growing.

But of course, not all eligible devices will be upgraded to Android 11 at the same time. Typically, premium models in the Galaxy S and Note series get the nod ahead of the midrange and budget devices in the Galaxy A and Galaxy M series. Galaxy S10 to receive OS updates up to Android 12

In this article, we keep track of all Samsung Galaxy devices that have picked up the One UI 3.0 update based on Android 11 so far, beta or stable. As usual, we will keep this article updated with the latest news whenever a new Galaxy device bags the new OS.

Samsung has now confirmed that the stable Android 11 update alongside One UI 3.0 for the Galaxy S20 line-up will be released later this year. As expected the S20 models will be the first Galaxy devices to bag the Android 11 update with others following soon. See more details here.

The latest development suggests that Android 11 is being tested on the Samsung Galaxy S20 series as well as the Galaxy M40 and A70S. Head here for the complete coverage.

IST 10:42 am: It appears that Samsung might be ready to release the One UI 3.0 update based on Android 11 soon. This is because a listing for the latest update to the Galaxy Wearable application shows something interesting in the changelog:

Since Samsung has updated its app for wearables to add support for Android ‘R’, i.e., Android 11, it’s possible that the company may release the One UI 3.0 beta shortly.

IST 08:10 pm: Samsung has kick-started the One UI 3.0 (Android 11) Developer Beta Program for the S20 lineup at least in Korea, and the registerations are now open even for the US region. Other regions may also get it soon.

IST 02:15 pm: According to an announcement from Samsung, the Apps Panel feature will roll out to devices with the One UI 3.0/One UI 3.1 update. However, it will also be available on all Samsung phones with the One UI 2.5 update. Head here for more details.

IST 11:30 am: Samsung has begun rolling out the One UI 3.0 beta update based on Android 11 for the Galaxy S20 series. As expected, there are a bunch of new changes and improvements that One UI 3.0 brings to the table.

We’ve added the exhaustive changelog for the first beta update below:

Home screen
– Touch and hold an app to add an associated widget
– Turn the screen off by double-tapping on an empty are of the Home screen. You can turn this on in Settings > Advanced features > Motion and gestures.
Lock screen
– Dynamic Lock screen now has more categories, and you can select more than one.
– Lock screen widgets are improved. Quick panel
– See your conversations and media more conveniently in their own sections when you swipe down from the top of the screen.
AOD
– Always On Display widgets are improved.

Accessibility
– Get quick access to the most important accessibility settings during device setup.
– Get recommended accessibility features based on what you use.
– Set the Accessibility shortcut more easily in settings.
– Sound detectors now work with your SmartThings devices such as TVs and lights to give you more visible alerts when the doorbell rings or a baby is crying.

Samsung Keyboard
– You can find the keyboard in settings more easily under General management in Settings, and the settings have been reorganized to put the most important ones first.
Samsung DeX
– You can now connect to supported TVs wirelessly.
– New touchpad multi-gestures let you change screen zoom and font size more easily.

Internet
– Added ability to block websites from redirecting you when you tap the Back button.
– Added warnings and blocking options for websites that shot too many pop-ups or notifications.
– Rearranged menus to make things easier to find.
– Added several new add-ons, including one that translates websites.

Contacts & Phone
– Added the ability to edit multiple linked contacts at one time.
– Added an option to help you quickly delete duplicate contacts.
– Enhanced the search experience.
– Extended the storage period of the Trash bin from 15 to 30 days. Digital wellbeing and Parental controls
– Added trends to your weekly report. You can see how your usage has changed since the previous week and check your usage time for each feature.
– Added phone usage time while driving to the weekly report.
– Added a lock screen widget so you can check your screen time without unlocking your phone.
– Added separate profiles for personal and work modes so you can track your screen time separately.

Camera
– Improved auto-focus and auto exposure functionality and usability.
– Improved stabilization when taking pictures of the moon at high zoom levels.
Photo editor
– Added the ability to revert edited pictures back to their original versions.

Bixby Routine
– Grouped preset routines help you get started quickly and learn how to build your own routines easily.
– You can now see what actions are reversed when a routine ends.
– New conditions have been added, such as a specific start time, the disconnection of a Bluetooth device or Wi-Fi network, a call from a specific number, and more.
– New actions have been added, including talking to Bixby and accessibility actions.
– You can add a customized icon for each routine and add routines to the Lock screen for quick access.

IST 01:27 pm: Users who registered for the One UI 3.0 (Android 11) Developer Pre-Beta update in the U.S. are now beginning to receive Samsung’s new skin on the Galaxy S20 series. For more details, head here.

IST 05:33 pm: It now appears that the Samsung Galaxy S10 Lite is being tested with Android 11. This is because the device was spotted on a Geekbench listing running Android 11. We’ve added a screenshot for reference below: IST 12:21 pm: Thanks to a video posted on YouTube, we now have an in-depth look at some of the features that are coming to devices that are eligible for the new Android 11-based One UI 3.0 update. Head here to know more.

IST 12:58 pm: According to recent reports, Samsung has started the development for the One UI 3.0 update based on Android 11 for the Samsung Galaxy Z Fold 2, Galaxy Z Flip, Galaxy Note 20, and Galaxy Note 20 Ultra. See all the details here.

IST 06:04 pm: A new report suggests that the latest update for the One Hand Operation+ module adds support for One UI 3.0 and also brings a few bug fixes. Moreover, it also resolves the long-swipe gesture detection issue on the Galaxy Tab S7.

IST 05:23 pm: Samsung unveiled the Galaxy S20 Fan Edition yesterday and also stated that the device will get up to 3 major OS updates. This means that it will get the update to One UI 3.0 and two more major Android version upgrades. To know which all Samsung devices are now in the 3 OS upgrades club, head here and here.

IST 12:50 pm: If the information floating around on Weibo (including a screenshot – see below) is to go by, the OneUI 3.0 public beta for the Galaxy S20, S20+, and S20 Ultra will be arriving sometime around mid-October, which means a few weeks from now. 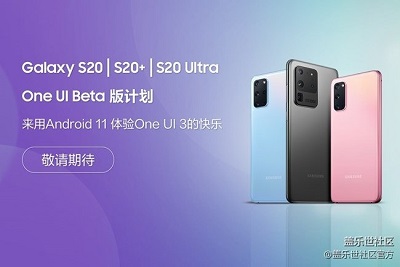 Here’s the link to that Weibo post we’re talking about.

IST 11:38 am: Samsung, via its Korean community page, has made an announcement claiming that the One UI 3 beta based on Android 11 is coming soon for the Galaxy S20 series in Korea. This isn’t a developer beta and thus all interested users can apply for it.

It’s worth noting that the available One UI 3.0 firmware as of this writing is the pre-beta version meant for developers in South Korea and the U.S. After this, a public beta version will be made available for folks in the UK, China, Germany, India, and Poland.

Public beta testing should last a month or two before the wider rollout begins, probably somewhere in September. As always, we will be here to let you know when the update is ready for your specific unit, so stay tuned to PiunikaWeb.

Next article MIUI 13 release date: Here’s when you can expect Xiaomi to unveil the update