Samsung started rolling out the Android 11-based One UI 3.0 update to its devices back in December. As expected, the Galaxy S20 series bagged the update first, and other devices such as the Galaxy Note 20 followed suit.

At present, the update is available on a handful of devices in several regions across the globe. Of course, we’ve been keeping a record of all developments related to One UI 3.0 that you can check out here.

Speaking of developments, TELUS has updated its OS upgrade schedule to reflect its plans to release the One UI 3.0 update for the Samsung Galaxy Z Fold2 5G, Galaxy Z Fold 5G, and the Galaxy Note 10+.

According to the information shared by the Canadian carrier, these three devices will pick up the update to Android 11 (One UI 3.0) on January 20.

We’ve shared a screenshot of TELUS’ software update schedule below for reference:

It’s worth noting that according to Samsung’s official One UI 3.0 schedule, these three devices were expected to pick up the Android 11 update in January itself.

But now that TELUS has confirmed the exact date, users won’t have to guess when they’ll receive the much-awaited One UI 3.0 skin based on Android 11.

The Samsung Galaxy Note 10+ is the only device of the three that has already picked up the new update in some other regions.

Since Samsung usually rolls out software updates in Europe and other countries before Canada, we expect to see One UI 3.0 begin rolling out elsewhere for the Galaxy Z Fold2 5G and Galaxy Fold in the following days.

That being said, we will keep an eye out for any new developments regarding the availability of the One UI 3.0 update on the Samsung Galaxy Z Fold2 5G, Galaxy Fold 5G, and the Galaxy Note 10+ and will post an update if and when new details emerge.

And while the One UI 3.0 update is yet to be released on many Samsung phones, users now have the One UI 3.1 skin to look forward to as well which is expected to bring some new features.

Further, to know more about the status of Android 11 for phones from all major OEMs and carriers, you can head here.

06:18 pm (IST): TELUS has released the Android 11 update for the Samsung Galaxy Note 10+ as expected. A user has taken to Reddit to confirm receiving the update. Unfortunately, we haven’t come across user reports confirming the same for the Galaxy Z Fold2 5G and Galaxy Fold 5G. 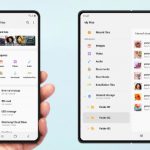