Android 11 has been around for quite some time but OEMs like LG and Motorola have been lagging much behind the likes of Samsung even when it comes to testing the latest OS.

While Samsung’s One UI 3.0 is under the public testing stage for the Galaxy S20 and Note 20 series, LG and Motorola might have just started with the development of the latest OS update.

Now, some development appears to have taken place where information about several devices being tested on Android 11 has come to light.

The information comes from Twitter where Max Weinbach, who has proven to be a reliable source, has shared the above-mentioned info.

Since none of the aforementioned OEMs have made any such announcements about the devices in question, this information should still be taken with a pinch of salt.

Nevertheless, if the shared info is indeed true then it is good to see the likes of LG and Motorola joining the Android 11 bandwagon despite coming in late.

It must be noted that reports of Motorola Android 11 development going live surfaced by October-end but the OEM has not stated anything on the matter yet. 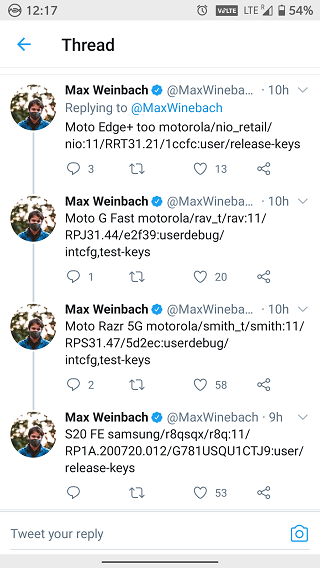 Also, it was suggested in early October that Android 11 testing had begun for LG V60 ThinQ while there were no such reports on the matter until now.

We also reported that Samsung Galaxy S20 FE may take some time to join the One UI 3.0 (Android 11) beta program but the latest info suggests otherwise.

Moreover, the Moto Edge+, Moto G Fast (aka Moto G8), Moto Razr 5G, and LG V60 ThinQ being tested with the latest OS update is still big news as both OEMs are not known for timely updates.

That said, we will keep tracking this for further development and will provide details when new information becomes available.

In the meantime, you can check out our Samsung, Motorola, and LG Android 11 update trackers to get the latest updates on the topics.

As it turns out, Max Weinbach has also confirmed that Android 11 is being tested on the Samsung Galaxy Fold2 as well with the software version F916USQU1CTJ5. Thus, it’s likely that we may see the update begin rolling out soon.

06:30 pm (IST): Samsung has started the One UI 3.0 beta program for the Samsung Galaxy S20 FE 5G in Korea. Interested users can enroll for the beta and will be able to try out the new skin on their device after they enroll via the Samsung Members app.

05:00 pm (IST): LG might be gearing up to release the stable Android 11 update for the Verizon LG V60 ThinQ 5G since the company has released the Android 11 kernel source code for the model. Head here to know more.

Some YouTube creators say that likes aren't registering on their videos, but there's a possible explanation