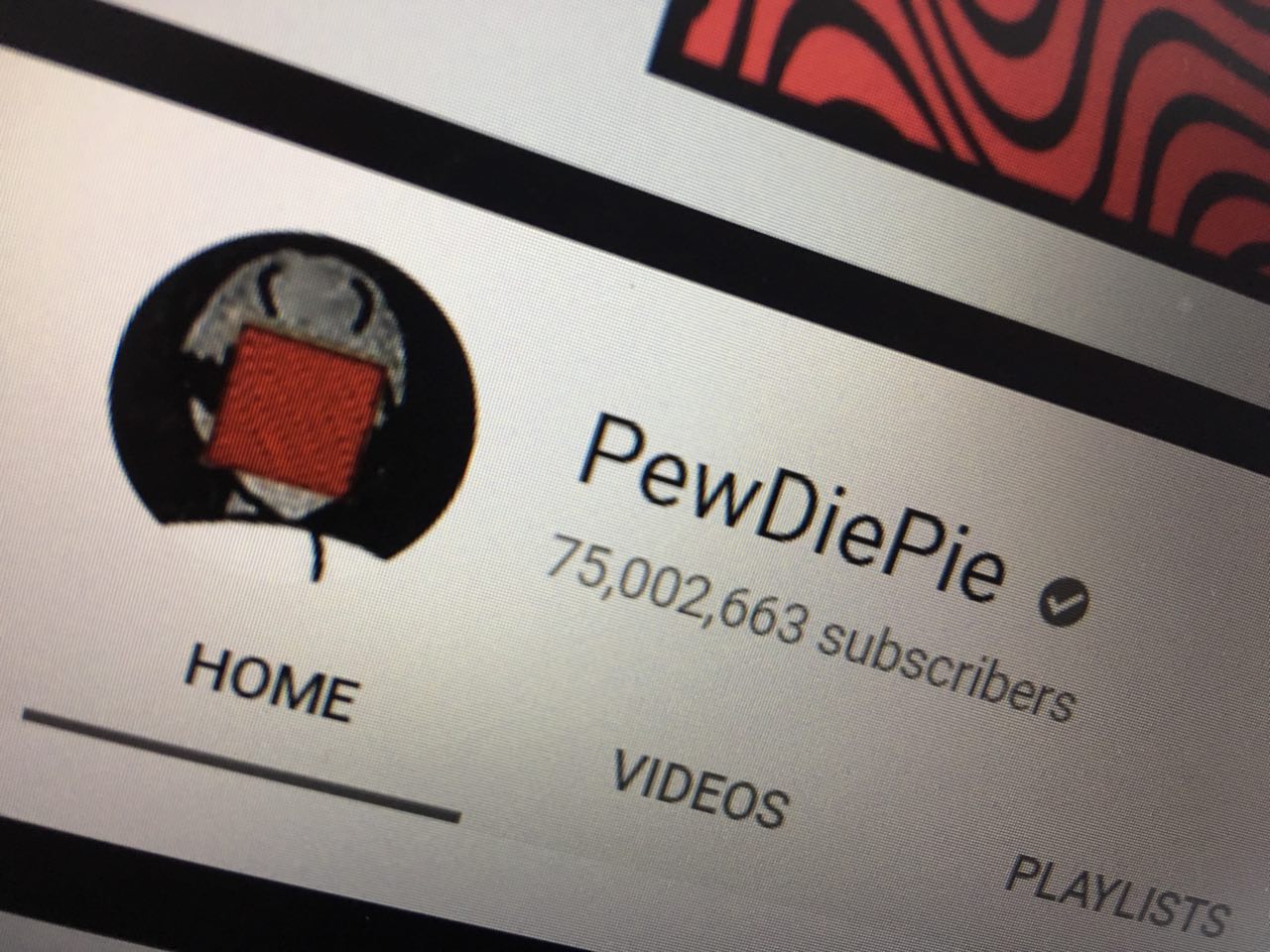 Site wide announcement: We have enabled comments at the bottom of news stories. Please engage yourself in meaningful conversations.

-> One of PewDiePie’s biggest fan account (with over 100k followers) has been deleted by Instagram. What’s the social media service up to? Learn more in our latest story here.

PewDiePie again accused of promoting anti-Semitism, but this time it’s completely baseless. Yes, another attempt to drag the YouTuber into a controversy. Details here.

Markiplier – who saved PewDiePie from being overthrown as YouTube’s most subscribed channel by an India’s T-Series – has now been overtaken by India’s Zee TV in YouTube subscribers. Will PewDiePie come to Markiplier’s rescue? Check out our latest story here.

-> The PewDiePie vs T Series war is still raging primarily because of the involvement of fans from both sides. The latest salvo is from CarryMinati, who is one of India’s top YouTubers. His track ‘Bye PewDiePie’ garnered close to 5 million views in less than 24 hours. Watch it here.

-> PewDiePie has crossed the 80 million YouTube subscribers mark, but interestingly, T-Series isn’t far behind as well. Check out our latest coverage here.

Fans are urging PewDiePie to react on a video where-in a grenade explodes during a live stream on Twitch. The video has got over a million views, 3k retweets and 15k likes so far. Complete story here.

-> Remember the printer hacks carried out by PewDiePie followers to garner support for the Swedish YouTuber in their subscriber fight against T-Series? Well, looks like printer companies have taken notice of these hacks and have started notifying users to step up security to avoid such hacks. Details here.

-> PewDiePie has released his own version of YouTube Rewind 2018, and his video has already received more likes than the original Rewind 2018. Complete story here.

T-Series website taken down yet again as the Indian music company says we’re not competing. Check out the complete story here.

-> After Vox reporter Aja, now Julia Alexander from The Verge has also revealed she got threat messages from PewDiePie fans. We take look at the whole episode from a 360-degree lens. Don’t miss our latest story. Head here.

-> In a new video, PewDiePie talks about Tik Tok, an extremely popular, youth-focused app that’s being used by hundreds of millions of people around the world. Catch our take on the video by heading here.

Earlier this week, we reported about a video which showed a History teacher saying distasteful stuff about PewDiePie. Now, more information has emerged about that teacher, while the school has asked police for extra security amid threat reports. Complete story here.

->In his new video, PewDiePie has lambasted media outlets over anti-Semitic controversy coverage. We’ve got the whole summary for you here.

-> Watch a video shared by a Twitter user in which a history teacher says this to kids in class: Retweeting PewDiePie promotes antisemitism and genocide, and could also land you in trouble.

Ubisoft employee Dianna, who had urged gaming industry “to end” PewDiePie, has reportedly been fired by the company. Complete story here.

Yesterday, we told you about a YouTube announcement where-in the company said users may see a noticeable decrease in their sub count as spam subscriptions are being removed. Today PewDiePie took to Twitter to reveal how many subscribers he lost. Not only that, Felix also revealed how much the process affected T-Series’ subscriber count. Details here.

-> You’ll likely be aware of a recent printer hack as part of which a PewDiePie fan – known as TheHackerGiraffe on Twitter – hacked hundreds of thousands of printers worldwide in order to urge people to support the channel in its ongoing subscriber war against Indian music label T-Series. Well, the hacker is at it again. Printer hack 2 is happening as we speak, and this time, TheHackerGiraffe has collaborated with another hacker who is known as j3ws3r on Twitter. More info here.

-> We knew it was going to happen, and now it’s official. YouTube Rewind 2018 has become the most disliked video on Google’s video sharing platform. With close to 11 million dislikes now, this year’s Rewind overtook Justin Bieber’s Baby, which was occupying the top spot for over 7 years now. Read our detailed coverage on here.

-> Just yesterday, we told you how a BuzzFeed News reporter tried to drag PewDiePie into a new controversy, but failed. And now, another journalist has been apparently spotted saying distasteful things about the YouTuber. Complete story here.

-> We have compiled some more, valuable information on the T-Series website hack. Details here.

-> The person who highlighted PewDiePie’s shout out of E;R (a channel with videos featuring anti-Semitic content) has now hit out at PewDiePie:

which ironically is something you admitted to (great) and edited out the shoutout in the previous video, acknowledged that creator was bad, only to shout out the creator twice in this one. i’m no apology expert like urself, but this seems like a double oopsie.

-> A BuzzFeed News reporter tried to drag PewDiePie into another anti-Jew controversy, but ended up being brutally trolled on Twitter. Complete story here.

-> While the anti-Semitic shout out controversy fire isn’t doused yet, something else from PewDiePie’s video is now making headlines: the comment Felix made on SonicFox’s acceptance speech at the 2018 Game Awards for winning the Best Esports Player. Details here.

-> PewDiePie landed in hot water after he endorsed a YouTube channel that contains videos featuring anti-Semitic content. The Verge was the first publication to highlight this news. Now PewDiePie has responded to the controversy by attacking The Verge. Details here.

-> Marques Brownlee – tech video producer, popularly known as MKBHD – has jumped into the T-Series vs PewDiePie YouTube subscriber battle, supporting the Swedish YouTuber. He has also talked in detail about what’s wrong with YouTube Rewind videos. It’s a must read – head here.

-> PewDiePie has overtaken YouTube Sports in terms of subscribers to become the third biggest channel. However, the Swedish YouTuber has got embroiled in another major controversy. For details, head here.

-> Oh no. Rewind 2018 – which doesn’t feature YouTube’s most subscribed channel PewDiePie – is on way to become most disliked YouTube video ever. Details here.

-> Latest development in T-Series vs PewDiePie battle – T-series website is down, who is behind the attack? Read the complete coverage by heading here.

-> Like 2017, PewDiePie was excluded from YouTube Rewind 2018 as well. And like he did last year, he has now released a video roasting this year’s Rewind video. It’s a must watch as he talks about various topics in his own style, and oh, did we tell the Rewind 2018 video has a reference to PewDiePie’s chair? All this and more here.

-> A fan has created a PewDiePie Fortnite skin, pushing it as the ultimate idea to keep the channel ahead of T-Series in the YouTube subscriber race. And for those who want to keep a real time track of subscriber number for both channels, there’s a live stream for you. Both these developments in our latest story here.

-> PewDiePie has been excluded from YouTube Rewind 2018 video. Why YouTube chose not to include their most subscribed channel in their annual recap video? Read our coverage here.

-> YouTube Rewind 2018 gets big thumbs down from viewers. Details here