Pokemon Go is among the most played augmented reality games where new events keep on taking place.

While developers keep on enhancing their software, several issues and bugs always linger around. It is only natural for games like Pokemon Go to have some issues and bugs as long as they are being taken care of.

Also, Niantic is known for acknowledging and addressing widespread issues and bugs in time.

However, it is still not feasible to take care of each and every issue in the game which is why the developers keep track of them. As per the Pokemon Go Known Issues page, there are still several issues under investigation whereas most of them have already been addressed.

On the other hand, the GO Battle League Known Issues page has a different story altogether as most issues are still being investigated.

It is, however, good to see that Niantic is working to resolve the Pokemon Go and GO Battle League known issues. 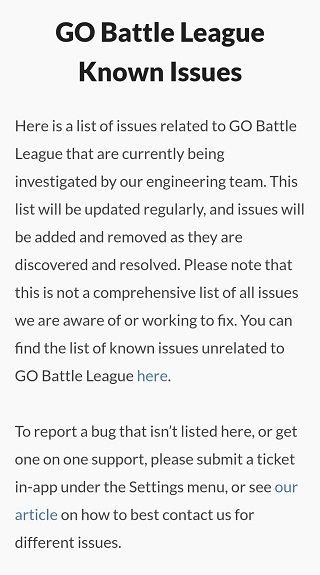 That being said, it may still be difficult to keep tabs on which bugs and issues have been acknowledged, fixed, or are under investigation.

So, we will be tracking the status of all existing Pokemon Go and GO Battle League issues and bugs to save players’ time.

We will regularly update the tracker below as and when new details regarding Pokemon Go bugs and issues come to light so keep a weather eye on this post.

06:30 pm (IST): 1. Niantic Support has stated that the Pokemon Go issue where the Level-Up statistics are shown incorrectly should be resolved in the upcoming 0.207 release.

2. Some users report that they’re facing an issue where the encounter background is shown every few seconds in the game when GO Battle League matchmaking fails. Thankfully, Niantic is already investigating the matter.

3. Some users have complained of a non-dismissible “Don’t play pokemon go while driving” prompt when starting the game. Niantic is already investigating the issue.

4. Some users have reported that Pokemon Go is not registering the right number of raids to which Niantic has responded that the issue should be fixed with the upcoming release (0.207).

03:30 pm (IST): Pokemon Go players on iOS are facing an issue where the app won’t sync traveled distance accurately in Adventure Sync mode. The issue is under investigation.

07:41 pm (IST): Pokemon Go players are still facing lagging issues, according to a recent report from Twitter. However, Niantic has acknowledged issue related to latency and is working to mitigate them.

08:36 pm (IST): Niantic Support has updated the Pokemon Go Known Issues page with a couple of new issues and their current status. Among them, the issue where Ditto might appear as the shiny version of opponent’s Pokemon that is not yet out in the game.

08:00 pm (IST): As per recent updates from Niantic Support, the issue where the referring Trainer is not seeing the Kanto Gold medal referral milestone as completed is being investigated.

On the other hand, the Melmetal Charged Attack issue where the Switch and Charged Attack buttons disappeared during a Team Leader or Team GO Rocket battle has now been resolved.

03:17 pm (IST): Pokemon Go players are facing issues with the GBL battle where they aren’t able to tap anywhere during the battle. And at some instances, Pokemon starts with a health of less than 100%.

Niantic support says there are aware of this issue and an investigation is going on.

07:17 pm (IST): Niantic has updated the Pokemon GO Known Issues page with the current status of some new issues where Trainers can face significant lag and frame rate drop, screen might lock at times even when Pokemon GO is running in foreground, and more.

01:10 pm (IST): The Niantic team has come out to acknowledge the annoying lag, freezing, and slow animations issue affecting some Pokemon Go players, confirming that investigations are under way. Details here.

03:23 pm (IST): Niantic has now confirmed that they’re aware of the issue where the app gets stuck on the post-login warning and that it will be resolved in an upcoming release.

01:44 pm (IST): It seems Niantic is aware of the Pokemon sounds issue during the capture phase and the same should be fixed in an upcoming Pokemon GO app update.

Thanks for flagging, Trainer! We’re aware of an issue with the Pokémon sounds during the capture phase. It should be resolved in an upcoming app version, keep an eye out. Let’s dig into this further over DM! ^TA
Source

02:55 pm (IST): Niantic is aware of a bug in the game that causes bright flashes which affecting players who have epilepsy. Unfortunately, there’s no ETA for a fix. Hence, play the game with caution if you suffer from epileptic seizures.

02:55 pm (IST): As per recent reports from Twitter, Niantic is aware of the issue where trainers are still seeing items in the Gym Badges list and the same is being investigated.

06:45 pm (IST): Niantic is working to resolve an issue where Pokemon GO users cannot get past the warning prompt as the OK button does not respond. The said fix should arrive in an upcoming app update.

Sorry for the trouble, Trainer. We’re aware of this issue and it should be resolved in an upcoming app version.
Source

06:50 pm (IST): The Known Issues page for Pokemon GO Battle League has been updated with a couple of new issues where the app crashes on some iOS devicesduring the GO Battle League matches and the opponent’s game crashes when Pidgeot uses Feather Dance.

10:39 am (IST): It seems Pokemon GO players are not receiving confirmation emails after submitting their Wayspot nominations and even when any decision has been made about them. The same is under investigation.

Hi Bryan! We’re investigating an issue where users aren’t receiving confirmation emails when submitting new Wayspot nominations and when decisions are made about their submissions. Stay tuned here: http://bit.ly/34WJSY5 We have requested a few details via DM, please reply! ^SFSource

06:44 pm (IST): As per recent reports from Twitter, Niantic is working to fix the issue where Squirtle appears incorrectly in the Pokemon storage section.

Thanks for reporting, Tyler! We are aware and currently looking into similar reports. Please keep an eye on our official channels for updates. We appreciate your patience and understanding! ^SM
Source

Also, issues where the Pokemon does not appear, controls freeze after certain moves, and the app crashes during the GO Battle League Elemental Cup matches are also being looked into.

07:53 pm (IST): Trainers are facing an issue where feeding gym berries to Pokemons is slow but the issue will resolved in the upcoming Pokemon GO 0.213.1 update, as per Niantic support.

04:00 pm (IST): Niantic support has acknowledged the issue where trainers are unable to sort their Friends list with online status.

Sorry for the trouble, Trainer! Our team is investigating the issue where the Friends list can’t be sorted with online status. Please keep an eye out on our known issues page for updates: http://bit.ly/394xXsl Thanks for your patience! ^MS
Source

10:05 am (IST): Now it is coming to light that a section of Pokemon Go players are facing an issue causing them to get stuck at the loading screen.

Niantic through its support has confirmed that they are aware of this issue and a fix is in the works, set to come in the next update.

We’re aware of this issue and it should be resolved in an upcoming app version. Stay tuned here for more news.
Source

06:48 pm (IST): According to recent reports, Niantic is working to fix the issues with Pokedex where all Pokemon forms appear even if only one is caught and Shiny Pokemon not appearing.

We understand your concern, Trainer! We are aware of this issue and are working on a fix. It might take a while before the Pokédex accurately reflects the Pokémon you have seen and caught. Thanks for your patience! ^MS
Source

We’ll answer, Teddy! We are aware of this and working on a fix. It might take a while before the Pokédex accurately reflects the Pokémon you have caught. Please stay tuned to our official channels for updates. Thanks for your patience! ^SK
Source

04:10 pm (IST): Some Pokemon Go players are reporting that the enemies show up with invisible Pokemon during the Battle League. Niantic is yet to acknowledged the problem. Here’s a screenshot for reference: