In order to be part of Google’s Android One program, OEMs have to meet certain conditions set by the search giant. One of these conditions is to exclude any third-party apps from the pre-installed OS, leaving users with what is essentially AOSP.

Another condition that is equally important, more so to end-users, is the promise of at least two Android OS upgrades from the time of purchase. This means the device should run on at least three different OS versions, including the pre-installed version.

In addition to affordability alongside regular security patches for up to three years, the Android OS software update policy attached to Android One devices is what keeps many glued to the latest Nokia smartphones.

Matter of fact, the HMD Global licensee is one of the few brands that guarantee at least two major Android OS upgrades to the most budget of phones like the Nokia 1 and Nokia 1 Plus. With this in mind, we can easily tell which devices are also in line for the next Nokia Android 11 update.

Like the Nokia Android 10 update, we don’t expect the stable Nokia Android 11 update to arrive until Q3 or Q4 2020. When it arrives, the following devices should be in line to get the update (in no particular order), at least going by the known Android One software update policy.

Below are the Nokia devices that will receive the Android 11 update as their first major OS upgrade. These are the devices that come pre-installed with Android 10 OS.

As of this writing, most Nokia devices will get the update to Android 11 as their second and last major OS upgrade. Here, you find devices that come with Android Pie out of the box. The expected list is as follows:

The lists above are not official, but we will keep an eye on the official announcement and update this story with the exact availability details once we get them. Until then, rest assured that the above devices have a high chance of tasting the official Nokia Android 11 update.

IST 11:55 am: Nokia is yet to unveil its plans for the rollout Android 11 for its smartphone. However, thanks to third-party development, Nokia 6.1 Plus users can try out Android 11 via the POSP custom ROM for the device. For more details, head here.

IST 10:59 am: Nokia is yet to release Android 11 in stable or beta form for its devices. The company shared a roadmap for the availability of the new Android version for its devices on Twitter but deleted the tweet soon after.

We’ve shared the roadmap image below:

IST 12:07 pm: The company has once again shared its Android 11 upgrade roadmap. The timeline is exactly the same as the one shared on September 29 (See image above).

IST 05:17 pm: Despite its flagship status, the Nokia 9 PureView is still slated to get the Android 11 update in the second quarter of next year according to Nokia’s official timeline. More details here.

IST 02:47 pm: While Nokia claims that the Nokia 8.3 5G is “Android 11 ready”, it does not mean that the device will get sooner than expected if past trends are to be followed. To know more, head here.

IST 06:22 pm: The Nokia 5.3 has reportedly been spotted on Geekbench running Android 11. Therefore, Nokia may be close to releasing the update for the device since it is scheduled to get it between the fourth quarter of 2020 and the first quarter of 2021.

IST 07:30 pm: Nokia 8.1 users can rejoice since they can now install the internal Android 11 build on their devices. The process to get it on the device is a tad complicated, however, should be a breeze if you follow the instructions correctly.

IST 05:44 pm: According to a recent report, Nokia 8.3 5G has been spotted running Android 11 on Geekbench. Find out more about the latest OS update for the device in question by heading over here.

IST 11:50 am: Both Nokia 8.1 and Nokia 5.3 have recently been spotted on Geekbench running Android 11. It won’t be wrong saying the update may be somewhere around the corner.

IST 05:54 am: The Nokia 8.3 5G Android 11 update is now rolling out for select users in certain regions and brings about a plethora of new features. For more info, head here.

IST 12:08 pm: A recent tweet from CPO at HMD Global, Juho Sarvikas, suggests that the update to Android 11 might soon be out for more eligible Nokia smartphones like Nokia 8.1, Nokia 5.3, and Nokia 2.3.

IST 09:35 am: Nokia has released the Android 11 update for the Nokia 8.3 5G in Australia. The update is rolling out with the build number 00WW_2_200 and it also brings the January security patch to the device.

IST 10:43 am: New developments indicate that Nokia has started rolling out the Android 11 update to the second wave of regions. Check out more details here.

IST 10:17 am: Nokia has expanded its Android 11 rollout to Nokia 8.3 5G users in Poland and the UK. Check out all the details here.

IST 10:17 am: The Android 11 update is now hitting Nokia 8.3 5G units in Romania and Czech Republic. You can find more information here.

IST 12:17 am: The Q1 2021 is about to end and there lies no sign of Android 11 update for the promised devices. Nokia has cast down its users by failing to meet the Android 11 update rollout deadline. Head here for detailed coverage.

IST 05:47 pm: The Android 11 update for the Nokia 8.1 is scheduled to roll out this month in Netherlands and Belgium. For more details, check this out.

IST 03:29 pm: In an information circulated on geekbench, Nokia 1 Plus could be seen running on Android 11.

This has two possibilities. First, if this news is authentic, Nokia might just have planned to air the Android 11 update for the device much before the scheduled time.

And second, this could possibly be a Nokia 1 Plus running on Android 11-based custom ROM which makes more sense.

Being a budget device, scheduled for Q2, shouldn’t be Nokia’s top priority when they already have a bunch of other devices nearing their deadline to receive Android 11 update in Q1.

This piece of news should only be taken with a pinch of salt.

IST 07:29 pm: Android 11 update is up for grabs for the Nokia 3.2 users. The update brings much awaited UI change along with the security patches. Head here to read the detailed coverage.

IST 04:29 pm: As per the official schedule released by Nokia, Nokia 1 Plus, Nokia 9 PureView, Nokia 7.2, and Nokia 6.2 are expected to receive the Android 11 update this quarter. Find out more here.

IST 11:20 am: Nokia 1.4 that arrived with Android 10 out-of-the-box and was planned to get upgraded to Android 11 has now been spotted running Android 11 Go edition.

IST 05:53 pm: The day isn’t over yet. Nokia has commenced the rollout of Android 11 for the Nokia 8.1 handsets. Head here to find more information.

IST 06:04 pm: The Android 11 update for the Nokia 4.2 just went live and has brought with it a bunch of changes along with the March security patch. For details, head here.

IST 01:15 pm: Nokia has confirmed there will be a lot of devices receiving the Android 11 update this month. Head here to know if your device will get it and what else is cooking in Nokia camps.

IST 08:15 pm: Nokia 2.2 is the next device in the big list of Nokia Android 11 update. The company announced the rollout in a blog post this noon. Head here to know more.

IST 06:20 pm: The Nokia 7.1 has apparently been spotted on Geekbench running Android 11. But the device has already got its 2 major OS updates. So unless Nokia pulls a Samsung here (by offering 3 major OS updates), we’d suggest not getting your hopes up. 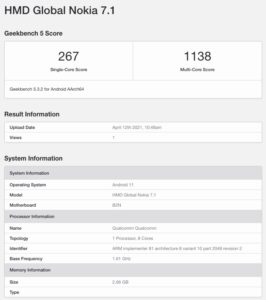 IST 07:13 pm: Nokia has finally released the Android 11 update for the Nokia 2.4. Check out our coverage on the matter here.

IST 11:05 am: Nokia has rescheduled the Android 11 rollout timeline which includes some new faces as well. Find complete details here.

IST 04:10 pm: Nokia 5.1 Plus has been spotted on Geekbench running Android 11 which is strange because the device has already bagged promised major updates up to Android 10.

This has to be a custom ROM because Nokia is already pre-occupied with the Android 11 rollout for the priority devices and a two-year-old device should be the last on their list at this moment.

IST 09:45 am: Vodafone Australia has begun testing the Android 11 update for Nokia 1 Plus 4G and we this suggests that we may see an imminent release for global regions too.

IST 12:05 pm: Users of the Nokia 1 Plus have something to smile about as the company is now rolling out stable Android 11 Go edition to these users in various regions. More on that in our coverage of the same here.

NOTE: The table below is being regularly updated to reflect the latest releases of Nokia Android 11 update