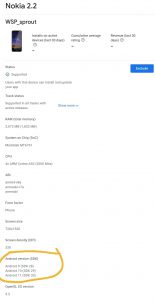 IST 12:00 pm: Nokia appears to have missed its Android 11 update rollout deadline as Q1 nears its end. The OEM has instead prioritized a trivial security patch over the Android 11 update for the Nokia 5.3 and 2.3. Head here to read the complete coverage.

IST 05:51 pm: The Nokia 8.1 is scheduled to receive the Android 11 update this March itself as per official sources. For more details, head here.

IST 01:17 pm: Nokia continuous to disappoint its users by releasing a mere security patch for the Nokia 2.2 handsets when it should be receiving the Android 11 update.

IST 05:49 pm: Nokia is back in the business as it has now started rolling out the Android 11 update for Nokia 8.1 in a back-to-back rollout today. Head here to know more.

IST 08:20 pm: There’s only one device left in this list as Nokia 2.2 has received the Android 11 update today. Find out more here.

Previous article [Update: Mar. 27] Want to remove Google Chrome Tab Search? Here’s how to do so