One Piece 969 raw scans finally out - The retaliation

Finally, we can read One Piece 969 raw scans with English translation. Although raw scans release a few days before the official one, it seems like they will be released a day later than we usually expected. A difference in translation is still expected from the official release.

However, for now, we can enjoy and feast our eyes on the available One Piece 969 raw scans. Some spoiler details are clarified with the raw scans. But Kudos to those who initially provided English translation as they are almost 100% correct. The title for the upcoming chapter is “The Idiot Lord”. This sounds about right especially given how the chapter portrays Oden’s idiotic acts. However, this might change in the official translation. It is not expected that much though as the raw scans usually get the title right.

Anyway, the cover story shows a fight between Gotti and the marines. If we will recall, Chiffon was captured by the marines in the previous chapter cover. Gotti seeing his captain’s wife in trouble throws himself in to save her. He faced an easy defeat though as the marine he encountered seem pretty strong.

I wonder if Oda is introducing us to new marine faces who will be challenging foes for the Straw hats and their allies. In any case, it is also exciting to see how this cover story will end. When Lola and Chiffon reunite, they will surely talk about how the Straw hats helped them. Who knows, Bege and his gang may be the next members of the Straw hat grand fleet. 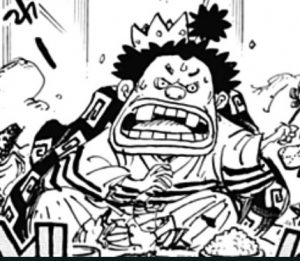 Moving on to the chapter content, it was pretty much covered in the spoilers and my previous articles. What caught my interest in the English translation of One Piece 969 raw scans is the names of Orochi’s closest confidants. Aside from the old woman who possessed the mane-mane no mi, another old folk steps in also with devil fruit power.

We first saw these two old folks in chapter 965 when the so-called Kurozumi conspiracy was revealed. Orochi did not know them before, but the theories of them being members of the Kurozumi clan is now confirmed. The old woman is Kurozumi Higurashi, while the old man’s name is Kurozumi Semimaru.

Their direct relationship to Orochi is not revealed but they were close to Orochi’s grandfather. Other than that, I believe their appearances may have deeper implications. Given the devil fruits they possess, they might have been on a powerful pirate crew before. Who knows, they may even be linked to the lurking legend. The real reason behind Oden’s submission to Orochi

Even his retainers were kept in darkness as to what happened between Oden and Orochi in the shogun’s castle. Oden’s idiotic acts afterward were a result of Orochi’s treachery. But what could it have been? I believe the answer lies in the panel just before Oden was seen outside the castle.

While the citizens of Wano await Oden from outside the castle, Kadio suddenly appears. They were expecting Oden to get rid of Orochi and Kaido knowing Oden’s strength to be unnatural. The narration says that Oden knew no enemy of his caliber. But outside Wano, Oden faced much stronger foes than he has ever fought. He may have even heard the rumors about Kaido, who was once a crewmate to his first captain, Whitebeard. It is possible that Whitebeard already warned Oden about stronger foes like Kaido as Oden always attacks by impulse without assessing the enemy’s strength. Why Oden decided to break after five years of sacrifice

Oden subjected himself to Orochi’s will for five years dancing naked in the capital for money. He even bows in front of the shogun. This was a great embarrassment for him and his household, but he did so for a possible chance at redemption.

However, hearing his wishes were far from being granted, he snapped. There is a reason why Oden suffered for five years and i believe it is for the hope of saving his country. However, when his hopes were crushed, and hearing his closest ally would ultimately die, there was no longer reason for him to hold back.

Oden knew full well that they are no match against Kaido. The other daimyo tried and failed. So the main reason Oden decided to attack is to regain his honor. It was a suicide mission to win back the trust of his people. Maybe Oden knew he was going to die, but wanted to leave a legacy that will be remembered in the years to come.

Maybe it was even Oden who asked Toki to send Momo and his retainers to twenty years in the future. He may have put his trust in Roger whose will is expected to manifest when the right time to open the borders of Wano comes. Motorola Razr foldable phone with 5G is in works