This One Piece article is based on spoilers for One Piece 969. Only those interested in spoilers should take a read.

A few pages of untranslated raw scans just got out, and they just blew my mind. It is proof that Oda is more genius than all of us combined. Although some prominent fan predictions came true, other details in One Piece 969 spoilers are just beyond our imagination.

In the upcoming chapter, we will be shown what happened during Oden’s raged attack at Orochi. And while the spoilers also confirm some theories, it clears out some reasons for Oden’s name being slandered in the five years he stayed in Wano before his execution. 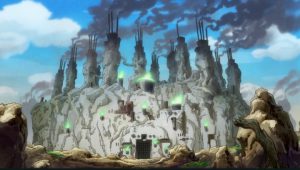 One Piece 969 spoilers were posted just moments ago on Reddit. Updates are expected until translated full scans are released. In the meantime, let us look into the given spoilers thus far.

-It seems Orochi jails Oden and the old woman takes the place of Oden
-1 year after Oden’s attack he discovered in a newspaper Orochi give to him, Roger’s death
-1 year after that, Gecko Pirates and Beast Pirates fight. Moria steal Ryuma’s body and Shusui
-3 years after that, Orochi kills Hyogoro’s wife and their 16 children
-Oden decides he will stop Orochi and Kaido with his servants
-Oden was laughing but crying at the same time when he knew Roger’s execution through the newspaper.

And the best part is that there is no break next week. Some spoiler image links were also posted and I will discuss some of them here.

We were left on a cliffhanger on the previous chapter where Oden was about to attack Orochi. This made us excited about Kaido’s awaited appearance. However, instead of the beast, Orochi’s other allies came to save him. Another mysterious old folk came to save Orochi using Bartolomeo’s barrier fruit.

This came as a shock to all of us and again it proves that Oda is more genius than all of us. This detail may have greater importance than what we see in it now. Bon Clay has the same devil fruit as the old hag, and Bartolomeo has the barrier fruit of the old man.

Interestingly enough, both Bon Clay and Barto are from East Blue. What if those old folks who were Orochi’s allies were aboard the ship who left Wano and went to East BLlue twenty years ago? The reason remains unknown, but it’s the only reasonable theory we can assume for now.

So Oden was imprisoned after his confrontation with Orochi. At least we guessed one thing right. And now we would understand how Orochi managed to soil Oden’s name so much that Wano’s history books were filled with them.

The old hag with the mane-mane no mi took Oden’s place while the former was imprisoned. With that accomplished, it was as easy as one, two, three to destroy Oden. Since the citizens of Wano do not have a working knowledge of devil fruits, they had no reason to doubt that the old hag disguised as Oden was him.

What would make it more believable is Oden’s bad history, let alone his association with pirates. The people of Kuri may have had doubts, but the rest of Wano is a different story.

More One Piece 969 spoilers to come. Keep updated by following piunikaweb. Translated raw scans are expected in the next days. The official release of One Piece chapter 969 is on January 26, 2020.

Next article Cost-effective Samsung Galaxy A01 will make it to the US market, confirms FCC certification