One Piece 966 theory: The Kurozumi Conspiracy ties with World Government

Okay, so this would probably sound a little crazy, but there is a big chance that the Kurozumi conspiracy is tied with the World Government. As you may be well aware, the Kurozumi Clan conspiracy was revealed in the One Piece chapter 965.

This chapter finally reveals how Orochi became the shogun and what his motivations were. It turns out, his desires rooted in his family’s past. But there has to be a more interesting plot twist behind this. 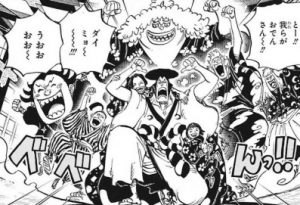 The fight for the shogunate

We learned in the previous chapter that the Kurozumi are part of the 5 great clans in Wano. Each family head served as a daimyo to the shogun, who was Kozuki Sukiyaki’s father. For a long time, the shogun had no heir, and they decided that the next shogun would be chosen from among the daimyos.

Those 5 clans were Shimotsuki, Kurozumi, Uzuki, Amatsuki, and Fuugetsu. Among them, only Kurozumi resorted to some heinous methods to be the only candidate. He accomplished this by poisoning the other daimyos.

However, a miracle happened, and the shogun’s wife bore a son, Sukiyaki. He will now be raised to be the next shogun. Eventually, Kurozumi was caught and was forced to commit seppuku as an atonement for his crimes.

All this history was revealed to Orochi by a mysterious woman. She seems to have some really close ties with the Kurozumi clan. It is safe to assume that she was a local of Wano, but was able to get out of the country for some time.

It is also possible that she had some interactions with big figures in the One Piece world, as she has the power of the clone-clone fruit, and has a copy of young Shiki’s face.

She may even be the one who encouraged Orochi’s grandfather to usurp the shogunate by poisoning the other candidates. I believe she revealed her motives in doing so when she said that whoever is in power ultimately decides what is right and what is wrong.

She also said that what was once considered a crime can be considered noble. I don’t think she is just talking about justifying the methods of Orochi’s grandfather. I think it has something to do with the outside connections. The World Government’s works behind the scene

It has been a taboo for Wano to have any connections from the outside. It is even considered a crime to leave the country. But how come the World Government seems to have an unlimited supply of sea stone which is endemic to the land of Wano?

The sea stone has been used by the World Government for a long time. That means, they have had some connection with the country that supplies them. And that connection is related to that old mysterious woman. Why did I say that?

When she was encouraging Orochi to take the shogun’s title, her main selling point for success was the quality of Wano’s weapons. She argued that Orochi can use them to have big players to back his cause. In the present day Wano, the CP-0 was found in Wano sorting some things with Orochi. Although the country of Wano has been an unaffiliated country for so long, I don’t think the World Government will leave it unchecked. The marines may not be the ones who directly do this as they constantly promote justice.

Cipher pol, on the other hand, is a personal espionage of the World Government. They are tasked to do some dirty jobs the marines would never do. Through them, the World Government does its works to maintain power, including annihilating a whole civilization or making connections with an isolated country.

Next article [Updated: Dec 17] Garena down, server not responding for many