One Piece chapter 968: Evidences that Luffy is the other king

So a big Joy Boy reference and mention were dropped again in the latest chapter. Some anticipated events are also happening back at Wano because of Oden’s return. However, we can’t help but notice the bigger picture hanging in the background of One Piece chapter 968.

As the story of One Piece is sadly in the denouement, more hints about the whole plot are being revealed. It is getting more clearer that the most important figure in the whole One Piece history is Joy Boy. What’s more interesting to note is that Joy Boy is anticipated to return in the present timeline. What we know about Joy Boy so far

Joy Boy was first mentioned during the Fishman Island arc when Nico Robin read his apology letter to Poseidon in a poneglyph. He has an intimate role in Fishman Island’s history concerning a promise to take the whole race to the surface. This promise was somehow broken due to some unknown events.

In recent chapters, we also found out that Joy Boy was the original owner of a vast treasure Roger and his crew found in Laugh Tale. Furthermore, his treasure and the poneglyphs that lead to them tell us that he is somehow connected to, if not the progenitor of the will of D.

In my recent article, I pointed out that Joy Boy may even be the authority figure or king of the fallen ancient kingdom. Some details in chapter 968 prove this point and I will lay them down for you.

What does the other king mean?

Roger disband their pirate group for two main reasons. First, he already accomplished his goal and his group already fulfilled its purpose. Secondly, he knew something has to be done when one finds the treasure. But since he is no longer physically able, he has to prepare for the following generation to inherit that burden. We knew this when right after he announced his decision to his crew, he recalled the sea kings’ conversation on their way to the Ryugu Kingdom. The sea kings were talking about a reunion between two sovereign beings or kings, the one being Poseidon, and the other was not mentioned by name.

Now we all know that they were talking about Joy Boy and his anticipated return. This is reinforced later when Oden mentioned that Wano has to be opened in preparation before Joy Boy reappears. The timeline is also matching as Oden wanted to open the country in twenty years, by which time Shirahoshi will fully realize her powers, and as the sea kings said, the two kings shall meet again. How is Luffy the other king?

Here is the best part. Shirahoshi is Poseidon incarnate. So she is the king or sovereign the sea kings were talking about. But what about Luffy? Where does he come in in the picture? The answer to that is the will of D. Yes, maybe the D family is related to Joy Boy. And yes, maybe the will of D can be inherited by multiple people at the same time. But, not all of them can be the ones to fulfill Joy Boy’s role.

When Roger left his crew, he said he would go meet Whitebeard before he dies. It is possible that they met just right before he turned himself into the marines. Meaning Ace was already conceived. Roger seems to be closest to those he fought with the most and trusts them like a true friend. 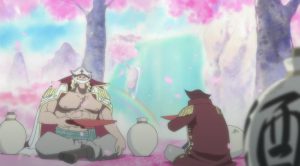 Roger told Whitebeard what the will of D is, I believe hoping that Newgate will help shape the next pirate king to fulfill Joy Boy’s mission. Ace was the first candidate as he is Roger’s son. Unfortunately, Ace died. However, Whitebeard saw in Luffy what Roger was talking about that’s why he ordered Marco not to let him die during the war in Marineford. Other evidence that Luffy is the other king

The most obvious reason would be because Luffy is the main character of the whole series. But there are several more. He obviously has the same spirit as Roger in terms of wanting to reach the final island in the grand line. In the first place, it is what motivated Roger in his quest. Also, several people in Roger’s crew saw in Luffy the person of Roger and believes he should be the one to succeed him. In chapter 968, Roger said that the voices he heard (sea kings) clearly stated that some will be born who will surpass or succeed him. And that successor will be the other king who will meet with Poseidon. Shanks may have been to first to see it in Luffy as he bet his arm for the next generation. Whitebeard remembered this when he encountered Luffy for the first time. Eventually and most notably, when Rayleigh met Luffy, he also believed that he will be the one to succeed Roger.