Is Tumblr shutting down? No. But there’s exodus and Newgrounds is gaining from it

So it’s been nearly a week since Tumblr started experiencing problems, and the situation hasn’t changed yet – the iOS app is still missing from the App Store, and searching NSFW content still isn’t possible (in fact this is now the situation for Android users as well).

This delay by Tumblr in fixing the ongoing problems has fueled rumors/speculations that the platform or service is shutting down. Let’s get one thing out of the way first, don’t believe in these rumors until you see something credible or official.

Getting Tumblr rid of child pornography isn’t a small task, so it may take time for the company to do that.

While Tumblr may be trying hard to achieve what’s required, their effort isn’t being appreciated by all users. As we have already highlighted, a lot of general NSFW blogs and even many SFW blogs have got purged in the process so far.

You can judge the intensity of the situation by the fact that there’s a dedicated hashtag #tumblrpurge on Twitter where affected users are discussing the ongoing situation at Tumblr.

The only way for users whose Tumblr blogs are now gone is to approach the company and make them understand their case. Of course, there’s no guarantee that you’ll get your blog back, but it’s worth trying. In addition, here’s a tip that might help you save your blogs.

So you see, these developments have created a sense of insecurity among Tumblr bloggers/artists, and the fear of losing their work is now forcing them to consider about alternatives like Newgrounds.

In fact, Newgrounds – which has been around for 20 years now – has already confirmed they’ve got a lot of new users who migrated from Tumblr.

Made a post welcoming all the new and returning artists to Newgrounds this week. Give it a read and learn some stuff about NG! https://t.co/52B2TtdckC

Then there are services like Pillowfort, which aren’t even public yet, but are trying to capitalize on this opportunity.

So you see, Tumblr has already started losing its user base, which is bad news for the company. However, it seems like their current priority is to get back on the App Store. It’ll be interesting to see how this episode unfolds further. 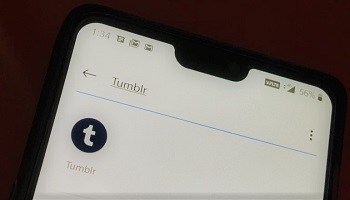