One Piece Chapter 965 prediction: Toki’s past

One Piece chapter 965 will finally be released in a few days from now. By this time, fans are eagerly waiting for the spoilers to surface. While their wait continues, let us discuss some theories and predictions about the upcoming chapter.

In the previous chapter, we learned how Oden got out of the country of Wano. We also had a glimpse of Roger’s interest in Oden. But the most intriguing part was Oden’s first meeting with Toki, and her willingness to board Whitebeard’s ship with him. This is the part I’d like to focus on.

When Kaido burned Oden’s castle, Toki used her ability to travel through time to save Momonosuke, Kinemon, Raizo, Kanjuro, and Kikunojo. Kinemon asked Toki to come with them but she refused. Hiyori and Kawamtsu were also left behind. It could be that Toki’s ability has limits.

Toki explained to Kinemon that she will not be coming because she’s already where she needs to be. Kinemon asked if she meant Oden, and she answered yes. I don’t think this is just a romantic gesture.

In chapter 964, Toki was searching for Wano. Then she learned that Oden is from Wano. Upon hearing this, she asked to be allowed to board Whitebeard’s ship with Oden. According to her, it’s been her deepest desire since childhood.

A bond forged by fate

In the upcoming chapter, Toki will probably get to know more about Oden. She might also know that Oden is a member of the Kozuki clan. It is unclear yet whether she was sent to the future, or was she just looking for Wano. But it is possible that she is looking for the Kozuki clan in Wano.

She might be just like Nekomamushi and Inurashi, whose family is related to Kozuki, and wanted to meet them. Since she first met Oden, she would naturally be comfortable with him first. She already revealed her age and that she is from the past.

I think we would see Toki in chapter 965 talking to Oden about her past. We might even discover how she got to the future and what’s her real intent in looking for Wano. Whatever the case would be, she still plays an undeniably important role. Evidence of this can be found not only in the current arc but also in the Zou arc. When Zunesha was attacked by Jack, Zunesha asked for permission to fight back.

Zunesha did something horrible in the past and was sentenced to only walk for eternity. He could only attack if permitted by the one who sentenced him. My theory is that Toki is related to whoever punished or sentences Zunesha. And Momo being her son, inherited the same right to command Zunesha.

The Amatsuki maybe like some Shimotsuki who left Wano a long time ago. To accomplish that, they employed the help of Zunesha. Since Wano is an isolated country, Zunesha was punished for helping. The one who punished Zunesha used the same ability as Tama. 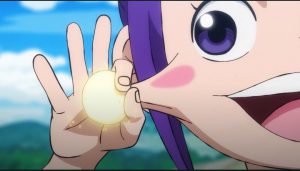 As we have seen before, when Speed was controlled by Tama’s ability, she was also subjected to Luffy by Tama’s request. The same could be true for Zunesha. Then the Kozuki clan may have used this opportunity to help the Minks find a home in Zunesha’s back. And that is when the Minks and Kozuki forged their bond.

We can learn more truth about Toki and Oden in the upcoming chapter. Chapter 965 will be released on December 15, 2019. Watch out for upcoming spoilers. Stay updated by following our One Piece section.