One Piece chapter 963 is just around the corner. With so many new thrilling events in the life of Oden, fans are hyped to see what will happen next. We may have to wait few more days to see the full chapter. But spoilers gives us a hint of what’s to come.

To that end we may wait no longer as spoilers already came out. A post on Twitter shows images of raw scans from the chapter. While a post on Reddit gives a brief description of certain events in the upcoming chapter. Here are some of them.

As it turns out, Inurashi and Nekomamushi’s arrival at Wano had nothing to do with God Valley incident, or Rocks pirates. According to the spoiler thread, the relationship between Minks tribe and the Kozuki family originated from hundreds of years ago. In the past, they made a pact of some sort which obligates one to help the other in time of need.

This story caught the interest of Nekomamushi and Inurashi. To see for themselves their allied clan, they set out to sea to find Wano. This is how they ended up along the shores of Kuri.

This new detail makes perfect sense. If we recall, the road poneglyph in Zou must have been there for centuries. Also, the Minks willingness to protect Raizo at the expense of their lives and home is exceptional. The Kozuki family and the Minks may have a Luffy-Fishman Island relationship. 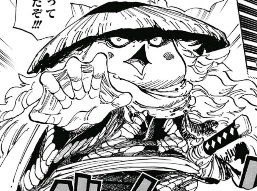 Another revelation for this chapter is the true nature of Kawamatsu. Untrue to his epithet, Kawamatsu is actually a fishman. Kawamatsu got stranded with his mother in Wano because their ship sank. It was not yet revealed where their original destination was. They must have been in Wano for some time that he decided to stay when mother died.

Kawamatsu was captured by the people together with Inurashi and Nekomamushi. He remembered what his mother told him about how other people treat fishmen. In order to avoid discrimination, he pretended to be a Kappa. A Kappa is a Japanese superstitious being living in the river. Maybe he thought that the people would be scared to hurt him. 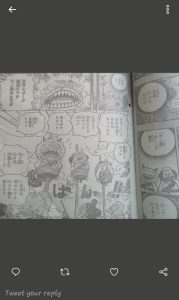 A Twitter user posted this image of a raw scan from the manga. It shows Kawamatsu, Inurashi and Nekomamushi being executed. As we all know, Oden came to save them from the people. 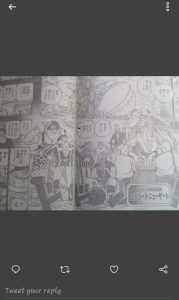 An exciting spoiler which was anticipated by many fans is the arrival of Whitebeard in Wano. Apparently, their ship was damaged and they had to land in Wano for repairs. A Twitter post shows an image of this panel. Their ship would take about a week to repair so they had to find a place to stay.

As outsiders are a taboo in the country, Oden came to see the pirates. Oden was especially interested not just because they are outsiders, but because they are pirates. It has been Oden’s life-long dream to sail the seas and he saw an opportunity with Whitebeard’s ship. 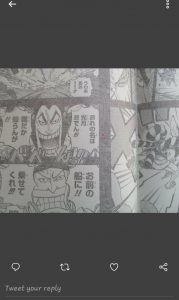 Maybe Oden was trying to test out how strong the pirates on the shore are that he decided to attack them. Here is another image of Oden clashing with Whitebeard.

The last part of the spoiler post details a reunion between Oden and his father. They probably have not seen each other since Oden’s banishment. And although Oden’s banishment was retracted, he was probably too busy in Kuri to visit the capital.

Oden heard that his father was sick and he visited him. Sukuyaki was surprised to see how rapidly Oden has grown. Their conversation probably included a topic about being the shogun. My guess is Sukiyaki wanted to pass down the title to Oden. Then Oden would refuse saying he will sail out to sea.

I can see their conversation not having a very good ending. Oden then will regret it in the future for it will be their last conversation.

One Piece chapter 963 will be officially release on November 25 in the weekly Shonen Jump issue. Keep posted for more detail by following piunikaweb. 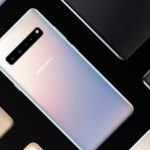 [US as well] Samsung pushing sixth One UI 2.0 beta (Android 10) update for the Galaxy S10 lineup