As Oden’s history starts to unfold in One Piece chapter 961, the formation of the Nine Red Scabbards are also being hinted. After being disowned and banished from the capital, Oden went to Yasuie in Hakumai.

He was accompanied by his first two loyal confidants, Denjiro and Kinemon who later became the leader of the scabbards. In One Piece chapter 962, we should see more of Oden’s deeds that led more to follow him. Here are some recorded events that may have led to the formation of the Nine Red Scabbards.

In the previous chapter, Oden saved the capital of Wano from the mountain god.

Aside from the capital, he also saved the people swallowed by the giant boar in the process, including O-Tsuro. Kinemon clearly had some special feelings for Tsuro given his reaction when he found out that the mountain god swallowed her whole.

Oden’s acts saving Tsuro inspired Kinemon to follow Oden and even be willing to die for him. Denjiro, on the other hand, has already been a fan of Oden. Together they followed Oden and became his first retainers. Many others felt the desire to follow Oden, but they did not do so at that time. Yasuie was clearly unhappy about Oden’s actions tarnishing his name as a Kozuki. In chapter 842, Yasuie recollects his dialogue with Oden after his banishment. He emphasized to Oden his responsibility as the son of the shogun.

Oden openly refused to become shogun and expressed his desire to sail out to the sea. Yasuie told Oden that he must be a proper warrior first before he can be so selfish. This is what probably prompted Oden to take some actions to become a more competent samurai. Shortly after Oden and Yasuie’s argument, Oden headed to Kuri, the most lawless region of Wano. Outlaws gather in this region pillaging and killing every day. Ashura Doji was the most dangerous criminal among them all.

When Oden arrived at Kuri, he challenged Ashura Doji. Oden triumphed causing Ashura Doji to become his follower. Together they started to turn the place around. Oden rounded up the criminals to bring peace to Kuri. He also commanded the residents to build a village where they can live.

Oden also built what came to be known as the paradise farm to feed the residents. Kozuki Sukiyaki heard about Oden’s actions and granted him the title of Daimyo at age 20. For unknown reasons, Inurashi and Nekomamushi washed up the shore of Wano when they were young. Their appearance posed a threat to the people and they started attacking them. Oden however, defended them from the people.

This act of kindness caused Inurashi and Nekomamushi to follow Oden. Naturally, Inurashi and Nekomamishi also became Oden’s retainers. They became so loyal to Oden that they followed him even in his journey with pirates. When Oden joined the Whitebeard pirates, they accompanied him.

They also boarded the pirate king’s ship. For some reason, however, they did not continue the journey to Laugh Tale.

Among all of Oden’s retainers, Kawamatsu is perhaps the most unconventional. There is no revealed history yet as to his origins or how he became one of Oden’s retainers. He was given the epithet kappa not only because of his appearance but also because he might be an actual kappa.

In traditional Japanese folklore, a kappa is an amphibious demon or imp. They are typically depicted as green, human-like beings with webbed hands and feet. Kawamastsu shares similar physical attributes. The kappa is known to favor cucumbers and love to engage in sumo wrestling.

Kawamatsu is also known as a sumo wrestler. In fact, he is considered as a yokozuna-ranked sumo wrestler. Kappas are accused of assaulting humans in the water. It could also be possible that Kawamatsu was saved by Oden at some point.

Oden was known to create a river by redirecting the water. This allowed irrigation for his paradise farm. Oden may have met Kawamatsu in the process and began their relationship as master and retainer. Like Kawamatsu, there is no record detailing how Kanjuro, Raizo and Kikunojo became Oden’s retainers. But it probably happened soon after Oden arrived in Kuri. Once the nine scabbards were assembled, they tried to steal money from Yasuie to support Oden.

Instead of punishing them, Yasuie allowed them to take the money and gave them more. During Yasuie’s execution, the scabbards present remembered what Yshuie told them during the time they stole from him.

They remembered Yasuie giving them more money to clean up themselves, practice manners, buy books and learn things. He pointed out to them that being Oden’s vassals means more than serving Oden.

Yasuie further pointed out to them that Oden will be the Shogun someday. And they who serve Oden must be the greatest samurai in the land. This he required because their duty will not only be to protect Oden, but the capital and the whole country of Wano. 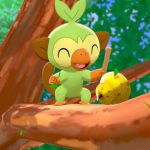