New updates are being added to the bottom of the story..

Vivo is about to make a major switch from Funtouch OS to another highly improved and “original” Android custom UI.

The OEM is getting ready for the Vivo Developer Conference event which is scheduled for November 19, 2020. The custom skin which is going to replace Funtouch OS is known as OriginOS and it is expected to be unveiled at Vivo Developer Conference.

Vivo has officially shared some details on its official WeChat account through several cryptic posts revolving around quantum physics and mass-energy equivalence (E=mc^2).

Also, the information has been shared on Twitter while the origin of the OriginOS news comes from Digital Chat Station, a Chinese tipster.

While it is still unclear how Vivo OriginOS will be different from Funtouch OS, what is known is that it will bring a complete UI overhaul.

Also, Vivo X60, which is expected to be announced between November and December, might offer OriginOS out-of-the-box.

However, the upcoming event might be when the OEM unveils both, Vivo X60 as well as OriginOS but this is still based on our speculation.

Vivo has been working on its Android 11-based Funtouch OS 11 update and Vivo V20 is very first device to offer the latest OS out-of-the-box.

It is, however, unclear which all devices are going to get the upcoming custom skin as a replacement for Funtouch OS.

Nevertheless, it is good to see OEMs like Vivo coming up with new and innovative ideas making the most out of AOSP.

That said, we will keep tracking this for further development and will provide details once new information becomes available.

IST 03:33 pm: The first leak for the OriginOS has come to light, thanks to a Chinese tipster. It reveals an interesting new feature. Check out the details here.

IST 04:20 pm: The first official posters for OriginOS have now gone live with the tagline ‘Brave New World’. The posters were shared on the Vivo account on Weibo. We’ve added a few of these images below. 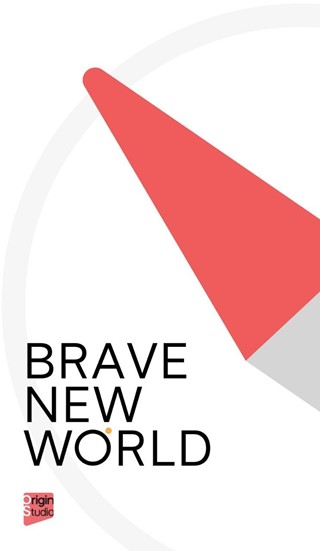 IST 05:10 pm: With the release of the posters, Vivo has confirmed that the company will indeed unveil the successor to Funtouch OS at the Vivo Developer Conference on November 19.

IST 03:54 pm: Vivo has once again teased its upcoming OriginOS skin by answering a few questions surrounding naming and philosophy of OriginOS. The text below has been translated from Chinese and thus may not be entirely accurate:

Q. What is Brave New World?
A. “Interact with your emotional instinct with a real experience close to reality”

Q. What vocabulary does OriginOS live by?
A. “we”

IST 04:05 pm: Vivo has announced that it will be unveiling OriginOS on November 18 at a Special Event in Shenzhen, China. This information was shared via the official OriginOS account on Weibo. IST 11:45 pm: iQOO has also reshared the OriginOS post above on Weibo saying “See you on November 18th!” (translated). Therefore, it’s possible that iQOO would pre-load the new OS on its devices too. Although we will have to wait for the official announcement for more details. 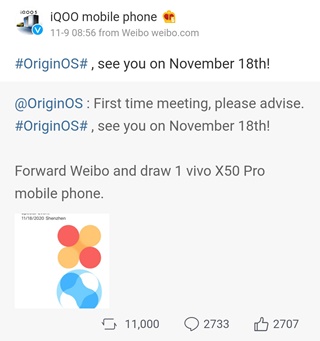 IST 04:58 pm: New leaked images of the Vivo X60 and Vivo X60 Pro have surfaced on Weibo showing of the design of the devices and also confirm that the two upcoming smartphones will launch with OriginOS on board. (Via)

IST 03:05 pm: Even before its official unveiling, Vivo has already started accepting registrations from interested users who want to experience OriginOS early. The new custom skin will begin rolling out on November 23 to those who successfully enroll for the program. Find more details here.

IST 03:40 pm: Vivo has officially taken the wraps of its new skin over Android dubbed OriginOS. Further, it has also revealed the timeline for when it plans to roll out OriginOS for eligible devices. Head here for the full picture.

IST 08:00 pm: Vivo, via Weibo, has shared an image that highlights the major new features that are present in OriginOS. Further, an individual has shared a video (in Chinese) detailing all that’s new in the skin.

IST 05:05 pm: Vivo has begun recruiting the first batch of beta testers to try out OriginOS in China. At present, the beta program is live for five devices:

The registrations began on January 6 and will remain open until January 20 (with the second round of recruitment beginning on January 13), while the update will be pushed to these devices from January 11-13, 2021.

Vivo has announced a list of devices that are set to get Public Beta builds of OriginOS as it commences the recruitment process for the same. These devices include:

IST: 02:13 pm: Vivo has just confirmed that indeed, OriginOS is exclusive to China and that the company has no immediate plans of bringing this custom Android 11 skin to devices outside its home market of China.

IST: 02:10 pm: IQOO is rolling out Android 11-based Origin OS update for the IQOO 5 Pro. The update brings a completely revamped UI and packs a host of new features. Head here to read the complete coverage.

NOTE: There are more such stories in our dedicated Vivo section so be sure to check it out. 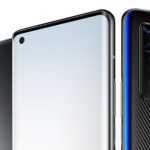