Android 11 is with us officially. A number of Google’s devices have already bagged this much-anticipated update with more OEMs set to follow suit pretty soon.

A few lucky users whose devices are popular with the developer community can even install unofficial builds of this new version of Android on their devices, albeit with a few shortcomings.

Officially, we’ve seen all major Android OEMs clamoring to develop their own skinned versions of Android 11. At the time of writing, various OEMs were at varying stages of the development process with some looking at timelines before the end of the year.

Not to be left behind, Vivo is today giving users a little glimpse of what to expect in the company’s upcoming skin on top of Android 11, Funtouch OS 11.

At the Thailand official unveiling of the Vivo V20 Series of devices, the presentation drops a few hints of what users and fans of the company’s skin should expect in the next iteration. According to Vivo, Funtouch OS 11 is set to embrace the customizability options available on Android 11 to offer users a smooth and authentic experience.

Additionally, Vivo says it plans to adopt a ‘less-is-more’ philosophy with this upcoming skin. This could mean that the company plans to clean out its UI and from the images shared, Funtouch OS 11 is set to be a lot more clutter-free. 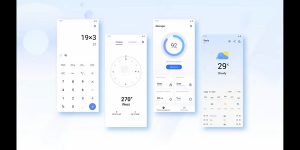 The same ‘cleaning up’ is evident from the shared snippet of Funtouch OS 11’s icon pack. The icons are a sharp contrast from the other Android skins’ colorful, saturated icons. We’re fans.

No Funtouch OS announcement could be complete without a mention of the company’s AI-powered personal assistant, Jovi.

The company has teased improvements coming to Jovi Home, saying a better and improved experience is in store for users who will get the update.

All in all, Funtouch OS 11 is hinted to be a highly customizable UI as always.

The launched V20 series is currently available with FuntouchOS 11 on top of Android 10.

For a list of (Funtouch OS 11) Android 11-eligible Vivo devices, check out our coverage of the same.