NOTICE: We will no longer be updating the September security patch tracker. Stay tuned to PiunikaWeb for all other coverage.

A huge chunk of Android users out there value security updates more than major OS updates. This is because most major updates often bring along bugs and issues that, at times, ruin the user experience.

Also, it takes ages before one gets a new OS update whereas security updates are pushed monthly, albeit to certain devices. And yeah, not all devices are updated monthly. Some, mostly the low-end variants, get quarterly security updates.

Just like major OS updates, once Google makes the security updates available, after which individual OEMs take over, something that slows down the rollout process.

Dragging the rollout further, carriers step in to ensure that the software is in good working condition before being pushed to carrier-locked devices. This explains why it’s mid-September yet only a handful of devices have received this month’s security update.

To make things easier for you, we’re going to keep track of the release of the September security patch for just about every device from all major OEMs and carriers in one place.

We will be updating the tracker as and when an OEM or carrier releases the September security update for their devices. Further, since a security patch does not always roll out in the same month itself, you may want to keep an eye on this even after September ends.

NOTE: Clicking/tapping on a concerned section in the OEM- and Carrier-specific index below will take you to the section/table of your interest.

NOTE: If the table below is empty it means none of the devices have received the September patch yet. The entries will be done as and when the updates go live.

NOTE: If the table below is empty it means none of the devices have received the September patch yet. The entries will be done as and when the updates go live. 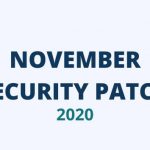 Some OnePlus users seem concerned with always-on location (GPS) icon, but it's probably nothing to worry about