The second round of the MIUI 12 update rollout schedule is over and Xiaomi is now gearing up for the third round. While a lot of devices have received the latest custom skin, the Redmi Note 8T is among those devices that are still in line to get MIUI 12.

The Android 10 update is also pending for the Redmi Note 8T which has left users highly disappointed. Xiaomi listed the Redmi Note 8T in the second round of the MIUI 12 update rollout schedule but now it seems that it might get the update in the third round.

However, the OEM has not yet provided any substantial information for the Redmi Note 8T MIUI 12 and Android 10 updates. Now, a new update has arrived for the device in question but it is still based on MIUI 11.

Xiaomi is now rolling out another Android security update for the Orange Redmi Note 8T units in Europe. The update version 11.0.5.0.PCXEUOR is does not offer anything new apart from the September security patch.

This means that owners of the Redmi Note 8T will have to wait a bit longer for the MIUI 12 and Android 10 updates. Nevertheless, Orange subscribers can now grab the September security update via the Updater app as it is live over the air.

Also, those who want to install the update manually can download the 1.9GB flashable file from the link given below. Here’s the the download link for the Orange Redmi Note 8T ROM:

It must be noted that this ROM is meant only for the Orange Redmi Note 8T units in Europe and it must not be flashed on any other variants of the device in question as doing so can cause the device to brick.

While Xiaomi is also busy with its Android 11 update, the development of the Redmi Note 8T appears particularly slower. That said, we hope Xiaomi soon provides the Redmi Note 8T with the MIUI 12 and Android 10 updates soon as users have been waiting since a long time now.

Also, we will provide updates as and when new information becomes available. Meanwhile, you can check out our Xiaomi Android 10 and MIUI 12 update trackers if your device is yet to bag the OS and latest custom UI updates. 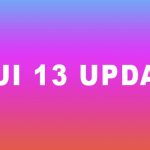