Asus is not a name to reckon with in the Android ecosystem. The OEM launched Asus 6z back in 2019 and it comes with a high-end specification such as Snapdragon 855, 8GB of RAM and a rotating camera module.

And if you own an Asus ZenFone 6z smartphone then, there is a new update available for download. Notably, the update bumps the security patch level to February 2020.

It arrives with the version number 17.1810.2002.133 and weighs in around 1.9 GB in size for the complete firmware while the OTA update weighs 74.82 MB. This new update also brings along optimized system stability, and feature of randomized MAC.

Although there is no official announcement from Asus about this update, you can still download the update from the download section below:

Keep in mind that the Asus ZenFone 6Z Android 10 update was served back in November 2019, and we have reported several posts about the bugs and issues the Android 10 update brought in for the device, for instance, double-tap to wake, fast charging, speaker bug, etc.

Moreover, users have shared video proofs of this issue on the community platform as well:

I play the beta version of the game Sky – Children Of The Light and report all the bug and performance problems to the developers. I’m testing it since Android 9 to Android 10. The game was running amazingly well. Smoothly at 60 FPS, but after the last Android 10 update (.119) the game has a bad performance, with “interferences” on the screen and low FPS (even though the game is set to 60 fps)

I can only capture the problem filming it from another phone. If I use the native Android 10 screen recorder, the video shows the game running PERFECTLY, so I guess it’s a display problem, and not an issue with the game itself. Important to mention that when the screen is being recorded, the fps is still low, but the interference on the screen is gone. When I stop the recording, the interference is back again.

I uploaded 2 videos. One filming from another phone and another using the native Android screen recorder. Notice how the game is shown running smoothly at 60 fps on the video recorded using the native recorder.

You can check out other user reports below:

Till .119 update there was not that much lag in COD and PUBG but in asphalt 9 there was lag but now evereything went crazy to new level it was shuttering a lot and in games it was lagging so much.please fix this in next [email protected]_ASUS @Anders_ASUS

Moreover, an Asus moderator confirmed that this issue will be fixed in the coming update. 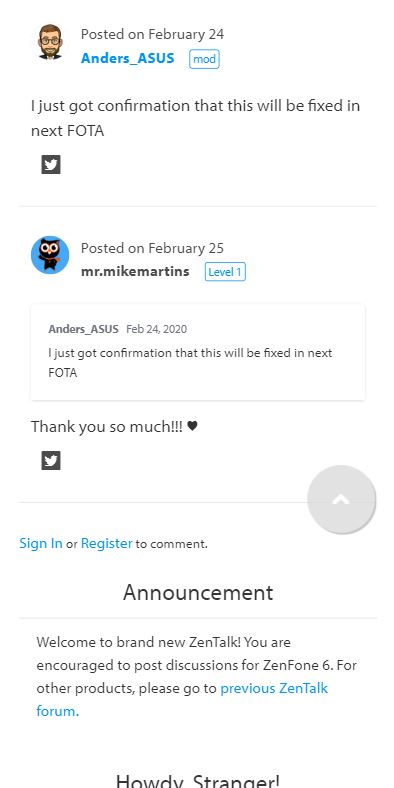 However, there is no confirmation from any users that this new update has fixed this issue or not. You can let us know in the comments below whether this update fixed the issue or not.

Asus has officially announced the update v17.1810.2002.133. However, one additional feature has been highlighted by Asus in the official changelog and that is the optimized charging function.