One Piece 917: Blackbeard – the rebirth of the worst pirate group

One Piece episode 917 gave us a short break from Wano country and brought our attention to the outside world. The main attraction, the Blackbeard Pirates. The first few recruits were introduced as captains of Blackbeard’s fleet.

Without question, Blackbeard and his gang have raised to a level of power considered to be a threat to the world. Although Blackbeard has the smallest bounty among all the Yonkos, we cannot deduce that his pirate group cannot compare with his equals. Marshall D. Teach is respected by his crew for his strength and power. We already know that before he even had two devil fruits, his strength compared to that of a commander in the Whitebeard pirates. Now with the two strongest devil fruits, it is not farfetched to assume that his Yonko title is not only for political reasons. Worthy of being Captain of Blackbeard’s first ship, Burgess is easily one of the strongest members of the crew. His huge physique, he can both endure powerful blows even from Whitebeard. His attacks are also powerful enough that the shockwaves created from them can destroy buildings Shiryu of the rain

The former head jailer of Impel Down imprisoned for killing some prisoners. He is extremely dangerous he had fo be locked up in level 6 where the most dangerous prisoners are held. 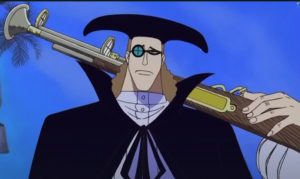 Van Augur is one of Teach’s first crew. He is an extremely skilled sniper who can shoot from miles with precision. When the Straw hats were heading to Mock Town, Augur shot a bird above their ship that is still out of sight from the island.

The corrupt king from North blue turned into a criminal after he was overthrown by his people for corruption. Little is known about his strength and abilities but he was dangerous enough to be locked up in Impel Down level 6. His power is also proven invaluable as he remained standing after Blackbeard’s selection in Impel Down. Also one of Teach’s first crew member. Although not much is known about his physical strength, his infiltration skills are incomparable. He managed to sneak into Mary Geoise during the Shichibukai nomination by Gorosei. Devon is the only female member of Blackbeard pirates. She is also considered the most dangerous female pirate ever to be imprisoned in Impel Down within the entire age of pirates. She ate the mythical zoan devil fruit which allows her to turn into a nine-tailed fox. Also known as Colossal Battleship for his enormous size, Wolf was originally one of the legendary criminals who was given a life sentence in Level 6 of Impel Down. He ate paramecia-type devil fruit which makes him much bigger than regular giants. Vasco Shot is another recruit from Impel Down during the Marineford arc. He is also a legendary criminal whose crimes and dees had been so heinous they had to be erased from history. During his time, Vasco Shot was the most feared criminal. Doc Q and his horse Stronger maybe sickly but their tandem is not something to be underestimated. Aside from being a skilled doctor, Doc Q can also make explosives infused in apples as we have seen in Mock Town. There is no telling what else he is capable of. From the profile of his crew and the way he recruited them, it is not a stretch to say he is trying to imitate Rocks D. Xebec. He even named his ship Saber of Xebec, which is to say, the sword of Xebec. It seems like Teach wishes to continue what Rocks failed to accomplish.

We cannot prove for now any intimate connection between Teach and Rocks. But he must have known about Rocks through someone closely affiliated with him. However, it is also possible that he heard about Rocks from Whitebeard.

As we have seen in chapter 964, he openly refused to let Oden join him because of Oden’s personal agenda. He then openly said that he had an issue with his past crew with similar kinds of members. This could mean Whitebeard was somehow open to his current crew about his affiliation with Rocks. If it was the case, then Teach may have developed a strong sense of respect for Rocks. I think Blackbeard’s family has been a victim of the celestial dragons’ tyranny. A desire for vengeance would be natural if it was the case.

However, Teach knew he was not strong enough to directly oppose the world government. Maybe he was hoping Whitebeard will do something, but we all know Whitebeard’s only ambition is to have and protect his family.

That may be one of the reasons Teach defected from Whitebeard especially when he gained the power of the Yami-Yami no mi. Now he is putting things in his own hands.

Next article Honor Play EMUI 10 (Android 10) update might arrive in March, date yet to be confirmed