South Korean smartphone manufacturer LG pushed Android Pie to their 2018 LG G7 ThinQ devices in their home country in the beginning of this year. LG G7 is an Android One device that originally shipped with Android 8.0 Oreo. It’s a high-end phone fueled by a Snapdragon 845 processor.

Following the update’s release in the South Korean region, US carriers like Verizon, Metro PCS & US Cellular also pushed the patch a few months later. Then after a long wait, just recently, even the T-Mobile variants of LG G7 received the Pie update.

But what about LG G7 ThinQ devices in other regions? Across different social media platforms, device owners can be seen inquiring about Pie’s arrival on their units. Well, the wait is over at least for LG G7 users in the UK, irrespective of whether they possess a carrier locked or unlocked model.

Going by the information coming from redditors, carrier locked variants of LG G7 ThinQ on UK-based networks like O2 and EE are now receiving the Android 9.0 Pie update. The patch bears build number V20b-EUR-XX, and brings along the May security patch instead of the latest one.

Here’s a user shared image of the software information:

Going by the user shared info, the Pie update on the unlocked variants of LG L7 ThinQ devices in the UK region carries the same version as locked models i.e. V20b. It weighs about 1.4GB and brings along the May patch.

As is usually the case with software updates, they’re released in batches, therefore Android Pie may take time to reach out to all LG G7 units (carrier/unlocked). Hang in tight, as you may get to see the notification anytime now.

After US, while LG G7 phones in the UK are now receiving Android Pie, devices on Australian network EMW have received the June security patch instead of the OS update.

Here’s hoping Pie lands on the left out LG G7 devices in different regions at the soonest. Rest assured, we are keeping a tab on all related developments and will let you know as and when that happens. 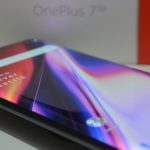