One of the largest wireless carriers in the USA, Sprint is having a big trouble lately to manage the Galaxy S10 users. Since the release of the 10th anniversary edition of Samsung Galaxy S series, Sprint customers are facing numerous network and LTE/data connection issues.

Still having network connectivity issues for my S10+. Not sure if this is @sprint or @SamsungMobileUS, but I'm really debating switching carriers and phones entirely. My phone is useless if it's not connected to WiFi. Hopefully I don't need my phone for any emergencies...

Got a brand new Samsung Galaxy S10+ from Sprint. It wont send messages or use mobile data. When calling Sprint they said it is a known issue and the phone needs to be exchanged. No apology, no compensation. Sprint has known about this for 6 weeks! #sprintsucks #samsungs10plus

Sprint officially acknowledged the glitches and posted a knowledge base article in their community forums. They tried to push an intermittent bugfix update at the end of March, but it was not effective for most of the users.

The carrier also admitted the chance of potential hardware faults in some units, and suggested users to opt for RMA.

Last week Sprint confirmed that a new update would be pushed on April 16. This update is aimed at solving intermittent voice or data issues. Here’s the exact words from the carrier:

And looks like they are right on their time! Samsung Galaxy S10 Plus users on Sprint network are reportedly getting a new OTA with LTE related fixes.

The full version number of this new update is G97xUSQU1ASD5; the value of x can be 0 for Galaxy S10e, 3 for Galaxy S10 and 5 for Galaxy S10+ (as seen in the screenshot). For detailed clarifications of these characters, see here.

The last four digits (ASD5) signify that the build is even newer than the one other US/Canada based carriers are rolling out aka ASD3.

The newest OTA update also comes with April 2019 security patch level, which makes Sprint the first US carrier to deliver the monthly security patch. To the contrary, Canadian carriers have started to distribute the March OTA merely a day ago.

Initial responses are pretty much positive after this update:

My fingerprint reading is instant. Thank you Samsung! I wonder what else under the surface it improved?? Wouldn’t been nice if it optimized other features too.

Sprint and Samsung are investigating complaints that some devices in the Galaxy S8 family are unable to connect to LTE following the DSC1 (Android Pie) update. For now, the software update has been placed on hold and cannot be downloaded. The software update will be released once more when the issues with it have been corrected.

Sprint customers were curious to notice the similarities between the issues, but a Sprint Community Manager confirmed that “the root cause is different”. How many of you are planning to switch from Sprint due to these network issues? Let us know by commenting below.

Sprint users are still facing the network glitches, even after upgrading to the build. 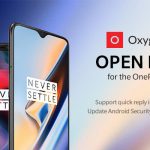