Now, it seems that the first quarter of 2021 is crucial for Nokia as a bunch of devices are in line to get the Android 11 update during the said period.

However, this is still based on our speculation and the info from the official Android 11 update roadmap shared by the OEM. Android 11 will be the last OS update for Nokia 4.2

This might mean that the OEM might release the latest OS update for the aforementioned devices in the near future.

Nevertheless, Nokia has been overly quiet on the matter so it is still unclear how the OEM plans to proceed with the Android 11 update rollout for its eligible devices.

While Android 11 is available for several Nokia devices in the form of custom ROMs, not everyone is familiar with modding.

This is simply because general users usually wait for an official build for their device as those are far more stable than early custom builds based on the latest OS update.

Also, the vanilla Android experience is what makes the Android One-based Nokia devices user friendly as it is easier to use.

Moreover, we will constantly update this story as and when new information becomes available so stay tuned.

In the meantime, you can also keep an eye on our Nokia Android 11 update tracker to get the latest updates on the topic.

11:39 am (IST): Nokia appears to be working on the Android 11 update for the Nokia 2.3 as the Android 11 SDK for the device has now popped up on the Google Play Console. The update should go live soon. 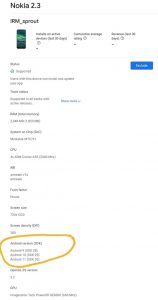 Many thanks for the tip, Tamilan Techinical!

12:20 am (IST): Nokia has released a new software update for the Nokia 3.4, however, there’s no Android 11 to drool on here. Instead, the update brings the February security patch and weighs 30.4 MB. The build version for the update is 00WW_1_33A.

12:00 pm (IST): Nokia’s Android 11 update rollout promises remain unfulfilled as Q1 2021 failed to deliver the major OS update to any of the devices in the pipeline. Head here to read the complete coverage.

12:53 pm (IST): Yet another Android 10-based update is rolling out for the Nokia 3.4 when it should be receiving the Android 11 update. This update takes Android security level to the month of February.

03:15 pm (IST): This should excite Nokia 3.4 users as the device has been spotted running Android 11 on Geekbench.

The device was expected to get the Android 11 update in Q1 but Nokia failed to keep up with the timeline. But with this news, Android 11 for Nokia 3.4 looks imminent.

IST 06:04 pm: The Android 11 update is now rolling for the Nokia 4.2 with the March security patch. Head here for details.

IST 02:58 pm: Nokia 2.3 users from countries other than the ones mentioned in the first wave are now receiving the Android 11 update. This indicates that the second wave may just have begun.

IST 07:17 pm: Android 11 is now making its way over to the Nokia 2.4. The company shared the info via a tweet. Check out all the details here.

IST 10:55 am: Nokia has shared the updated Android 11 update rollout roadmap which includes a rescheduled timeline for the remaining devices. Find the new roadmap here.

Next article [Update: Released] Moto G Fast Android 11 update to be released on May 11 in Canada