OEMs usually tend to initially release beta updates for major Android OS updates. And after receiving the feedback from these beta-testers, they rectify the shortcomings (if any) before releasing the stable build for the wider audience.

Realme also generally follows the same trend, but there can be exceptions too, albeit for the Realme 3 Realme UI (Android 10) beta update. Back in September, Realme revealed its roadmap for the Realme UI update. 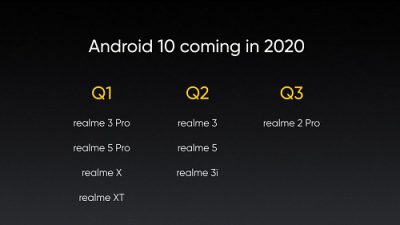 According to the said schedule, the Realme 3 Pro and Realme XT were to receive the beta update in the month of January. And the updates were indeed delivered on time to both these devices. Realme 3 Pro even welcomed a second build (re-released with bug fixes) of the said update.

It fixed the camera crash issue, the watermark displaying issue while viewing issues and also improved system stability. Along the same lines, Realme XT also welcomed the Android 10 update, bringing the ColorOS 7 and Realme UI to the fore.

Being true to its promise, both the Realme 5 Pro and Realme X also received the Android 10 update by the last week of February. Similarly, Realme X2 and X2 Pro users were able to take part in the early access recruitment drive for the Android 10 beta update.

And as per the schedule, both these devices will be receiving the stable build in this month (i.e March) itself. Likewise, Realme 3 and 3i should be next in line to get a taste of Realme UI based on Android 10.

However, there won’t be any beta recruitment at least for Realme 3. This comes straight from the Realme India Support. Realme 3 will directly be receiving the stable Android 10 build in April, as per the schedule. Here’s their official statement:

Hey, the beta version of realme UI will not be available for realme 3. However, we will roll out the stable update for the smartphone in April. Stay tuned!

Similarly, a few days back, another user asked about the Android 10 beta program for Realme 3. The current response from the Realme India Support was pretty much in sync with their earlier one. This confirms that there won’t be any beta recruitment for these two devices.

However, the stable Android 10 update still follows its roadmap and should land next month.

Well, this isn’t the first Realme device to skip the beta process. The same was said for the Realme 5 Pro Android 10 beta update, and the happened as well. The device directly received a stable build in the final week of February, at least in India.

With April approaching, the stable Realme UI (Android 10) update for Realme 3 isn’t far. We will keep you informed as and when the update goes live.