T-Mobile recently joined Verizon Wireless and AT&T in pushing the Galaxy S9, Galaxy S9+ and Galaxy Note 9 Android 10 update that brings the new One UI 2.0 skin to the trio of devices.

AT&T was the first to roll out the update earlier this month before Verizon joined the party last week. Earlier today, T-Mobile support revealed that the Galaxy S9 and Note 9 Android 10 update was up for grabs.

Now reports coming in via r/Sprint on Reddit also confirm that the same One UI 2.0 OTA is now being pushed to the Galaxy S9, S9+ and Note 9 on Sprint.

Android 10 is NOW available for the S9+
Source

Now they just release it for the Note 9.
Source

We already knew about the arrival of this update, so it was just a matter of time before the rollout begun.

Just updated this am. Here ro report NOTHING is amiss! Disclaimer, I use Nova, so I can’t attest to any One UI 2.0 quirks. Is VoLTE a setting somewhere, or just automatic?
Source

The Galaxy S9 and S9+ update is arriving as build number DTA3 and weighs in at close to 2GB while the Note 9 is receiving the same update with build number DTAA. In both cases, the latest February security patch is included.

In addition to installing the new One UI 2.0 and February security patch, the Galaxy S9 and Note 9 also get support for VoLTE as part of this rollout, so be sure to grab it once the OTA download notification arrives.

While Sprint hasn’t made updates to the software update pages for all three devices, a verified Sprint employee on Reddit did confirm that the update is available for the “bleeding edge”, implying that the rollout is gradual. 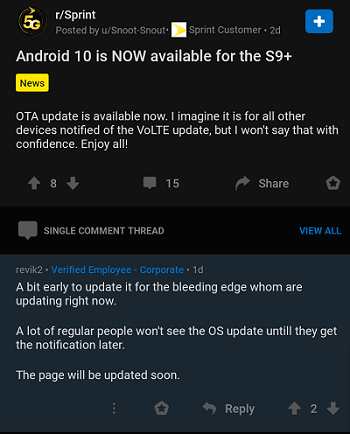 Up to the north, Rogers Canada says Android 10 won’t be available for the Note 9 until March 2020. Prior to this development, the update was expected to land in the country on this day (February 24), but that won’t be the case anymore, at least for Rogers subscribers.

There has also been talk of a March release date prior to today, so it doesn’t come as a surprise that Rogers has scheduled its release for next month as well.

One UI 2.0 update for Samsung Galaxy S9/S9+ and Note 9 will be releasing on March 09 in Canada. Details here.

After our initial coverage on Sprint’s One UI 2.0 update for the Galaxy Note 9, some of our readers pointed out that they hadn’t seen the OTA update on their units. Well, this doesn’t seem to be the case anymore as reports on Reddit can confirm that indeed the update is rolling out, this time for real.

NOTE: This article has been updated with comments from some device users on the carrier and a screenshot of a comment made by a verified Sprint employee on Reddit regarding the One UI 2.0 update for the S9 and Note 9 devices.