Samsung Galaxy S9 and S9+ will soon be succeeded for the second time when the Korean company unveils the Galaxy S11 or S20 for that matter later this month at the MWC 2020.

A lot has already been said about the immediate Galaxy S10 successor and even though most of it is based on rumors, one thing you can rest assured is the next Samsung Galaxy S flagship phone will be powered by One UI 2.x based on Android 10 out of the box.

So far, quite a good number of Samsung phones already have the One UI 2.0 skin on board. The software first rolled out in late November 2019 to the Galaxy S10 and later the Note 10 joined the party.

More recently, the OS has been spotted on U.S. unlocked variants of the Galaxy S9 and S9+. Interestingly, though, availability on carrier variants has been quite limited. 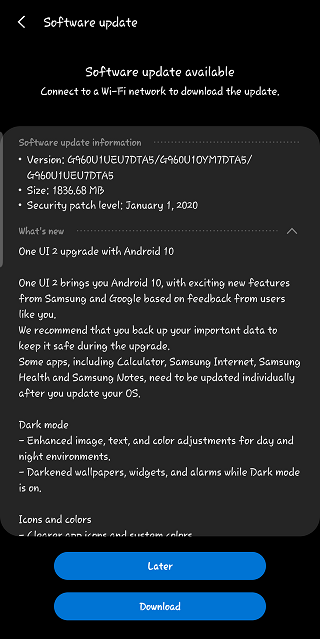 Matter of fact, only Xfinity Mobile and U.S. Cellular variants have the OS ready to download as of this writing, with all four major carriers still winding up things ahead of official rollout.

Both Verizon, AT&T and T-Mobile have had their say on when the Galaxy S9 One UI 2.0 update can be expected, with all pointing to February as the month the devices finally receive the OS.

On the other hand, availability details on Sprint have been dotted, at least until now. Apparently, the carrier will begin rolling out the OS this month too, just like AT&T and Verizon. However, there is no defined date, which is expected anyways.

While previous reports had placed the Galaxy S9 One UI 2.0 update availability in Canada on February 24, the latest now claims the rollout will begin in March 2020.

It’s possible that both could be true, where the initial S9 and S9+ batch pick up the update a week before the wider rollout kicks off. Unfortunately, though, none of the major Canadian carriers such as TELUS and Rogers have confirmed this, so we wait.

Sprint is now rolling out the much-awaited One UI 2.0 OTA update to the Note 9, S9 and S9+. Full details here.

One UI 2.0 update for Samsung Galaxy S9/S9+ and Note 9 will be released in Canada on March 09. Details here.

Like TELUS, Rogers Canada and Fido will roll out the stable One UI 2.0 update based on Android 10 to the Galaxy Note 9, Galaxy S9 and S9+ today, March 9, 2020. In fact, reports coming in can confirm the update is live. See the full details here.