Realme 3 Pro and Realme XT started receiving the stable Realme UI 1.0 update based on Android 10 a while ago. The former has even received a second Android 10 build with bug fixes and optimizations.

To better monitor the rollout of Realme UI 1.0 update to both Realme 3 Pro and Realme XT, the company has invited those interested to get the update ahead of the rest to sign up for the early OTA update.

For some reason, the initial batch didn’t receive the Realme UI 1.0 update as promised, thus breeding fears of a delayed rollout. Where is the realme ui 😠😠😠😠😠😠😠😠 If you’re sending the update late it’s not wrong but you’re announced the date and time but not send the update it’s truely painful, insane 😒 What’s your opinion dear realme?? Reply or comment
Source

While some thought the Realme UI 1.0 update for Realme 3 Pro and Realme XT had been delayed, the company reassured them that this was just a staged rollout, which meant that some units would receive the download ahead of others.

Hey, the realme UI update for realme 3 Pro is in a staged rollout process and will soon be available on your device. Stay tuned to our social media handles for further updates on the same. Thanks!🙂
Source 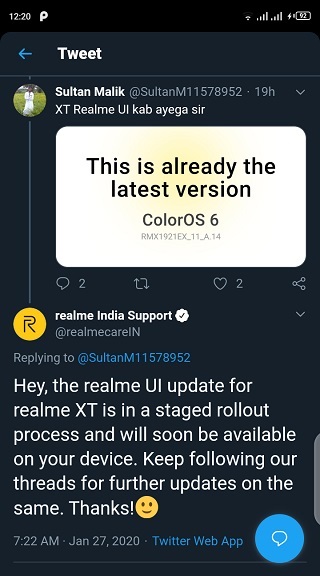 When pressed further on the same matter, a mixed set of responses came from various Realme support people. While one claims the Realme UI 1.0 update will arrive on January 31 for those who registered to get the OS after January 23. Another support member claims the rollout has been postponed due to technical reasons, with the software team already working to fix the issue and resume the rollout. But going by the latest developments in the Realme forums, it seems the stable Realme UI 1.0 update is now rolling out again to both devices. Where the Realme 3 Pro is getting an update to version C.02, the Realme XT’s update is arriving as version C.01.

It’s nearly two weeks since Realme UI update based on Android 10 started rolling out to Realme 3 Pro and Realme XT, but some haven’t received it yet. Details here.

On the other hand, Realme India CEO Madhav Sheth seconded the claim about pushing updates according to the IMEI registration. Next article [Not in India] Huawei Y9 2019 Android 10 (EMUI 10) update is coming after all, company confirms