Chapter 960 of One Piece gave us a hint of what Wano was like in the past. Compared to what it is now, Wano was unarguably better in all aspects. Maybe only sullied by few men, but nonetheless better.

We have also seen the past of Oden and other prominent characters in the current arc. It may be surprising to see how different they are compared to what we have known them so far, especially Kinemon who always talks of samurai honor.

We’ve been acquainted with the past of interesting characters like Kozuki Sukiyaki, Oden and Yakuza boss Hyougoro. Kinemon and O-Tsuro’s story also brought some excitement as their relationship in the past was very different from the present.

Among all those characters, however, Denjiro’s appearance is the most interesting and exciting. His appearance in the recent chapter has opened a lot of avenues for fans to speculate on his current status in the present timeline.

Denjiro has been the most mysterious among the Nine Red Scabbards. Speculations about his real identity have almost always been part of fan discussions for every chapter. But chapter 960 debunks almost all theories about him and opens the avenue for more interesting ones.

Denjiro was shown as a young man in One Piece chapter 960. It is his first clear appearance ever since he was introduced. He wore round glasses and his hair is in a ponytail. His apparel is a classic samurai kimono and a katana is fastened to his back.

Fans speculate that Denjiro is now out of Wano and took a different identity for some reasons. But while other theories are interesting and compelling, some fans like to toy around Denjiro’s identity. Facebook user Josua Rinaldi, posted a collage of Denjiro and Marine Commander, Major Inspector Shepherd for fun. He also highlighted some resemblant physical features among those two. Shepherd is also known as Condoriano and has been a subject of ridicule to the fans.

At first glance, Denjiro looks like a younger version of several characters, including Scooper Gaban. This, however, seems a little farfetched since Scooper Gaban has been in Roger’s ship at about the same age as Denjiro’s in the recent chapter. Another reason why Scoop may not be Denjiro is the difference in their weapon preferences. Denjiro wields a Katana while Scooper Gaban was only seen using an axe to fight. Nevertheless, we can still hold on to that thought as things may have another major twist.

Another theory is that Denjiro might be Koushiro. This is the most interesting and prominent theory about Denjiro right now. Many fans in a discussion thread on Reddit agree on this theory. Reddit user the5thyonko pointed out that a ship came from Wano to East Blue twenty years ago. It was about the same time Oden was dethroned by Kaido and Orochi’s allied forces. The redditor suggests that Denjiro a.k.a Koushiro was aboard that ship carrying Zoro from Wano. He then cited the theory that Toki had a vision of twenty years into the future, and that Denjiro’s flee to East Blue is part of fulfilling Toki’s prophecy.

Kozaburo Shimostuki crafted the Wado Ichimnoji. Since Hitetsu knows about it, Kozaburo must have crafted the sword while he was still in Wano. Maybe he left the sword at Wano before he left fifty years ago and it somehow ended up in Denjiro’s possession. 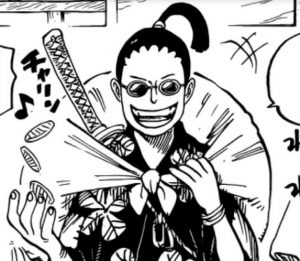 Some of these theories makes good sense while others obviously don’t. Let me share my theory as a consolidation of the things I mentioned and cited here. So here comes my theory.

Denjiro could be a distant relative and/or descendant of Kozaburo. That is why he has the Wado Ichimonji. He became one of Oden’s Nine Red Scabbard and helped Oden open Wano to the world.

Denjiro’s assignment was to find out why Kozaburo Shimotsuki left Wano fifty years ago. He changed his name to Koushirou as cover, ended up having a love affair and putting up a dojo to support his family (could also be part of his cover).

Koushirou learned about the coup at Wano and hurled towards the country to help the Kozuki family. He was a little late as Oden was already captured and about to be executed.

Since Orochi forced the daimyos of each region to join him, it is possible that Ringo’s daimyo did not agree with him and caused the destruction of Ringo. Denjiro saved an infant Zoro from Ringo and took the child to East Blue with him.

It may seem a little farfetched for now, but who knows. I might be right about some of those theories.