Android RCS Messaging has been talked up since April 2018. For the uninitiated, this is a messaging protocol that is meant to bring the many chat features we see in Instant Messengers like Facebook Messenger, WhatsApp, and even iMessage to the traditional Android SMS messaging services.

The fact that Android has multiple vendors who have their own approaches to SMS messaging using their own stock apps, implementing a universal standard across the board has taken Google quite some time. In fact, the search giant has had to reportedly take more control of the matter in order to make this dream come true. But the best it has achieved is enable RCS support in Android Messages by default, an SMS app that not every vendor has installed on their phones out of the box.

Apart from device makers, carriers also have their messaging apps installed on carrier-locked phones, which makes the story even more complicated. On the brighter side, some of these carriers have already bought into the idea fully, among them Google Fi, Sprint, and U.S. Cellular.

Even though RCS Messaging support is live on Verizon Wireless, AT&T, and T-Mobile, availability is limited to select devices, more so a few Samsung/LG flagships and Google’s Pixel 3 and Pixel 3 XL devices.

While the rollout process has been painfully slow, just like typical Android updates, there seems to be one major change of heart that T-Mobile users on Google Pixel 3 will relish. Apparently, RCS Messaging could arrive on the Pixel 3 devices after all. To realize full RCS Messaging support, carriers also need to approve support for individual phone models as they join the respective network. Earlier this year, 9to5Google revealed that T-Mobile wasn’t going to certify both Google Pixel 3 and Pixel 3a for RCS messaging.

For wireless provider grade performance, Our advanced messaging RCS capabilities are built into the core of the network rather than individual apps or devices, and the Pixels currently do not support this network-level authentication.
Source

But according to fresh reports just coming in, some Google Pixel 3 users on T-Mobile have their RCS Messaging feature already enabled and working just fine.

Yesterday I was able to activate RCS on my Pixel 3 through Google (T-Mobile network)!
Source

It’s not the first time RCS Messaging has popped on some phones and then disappeared after a while. However, it seems those who received T-Mobile Google Pixel 3 RCS messaging support have been able to keep this setting even after enabling and disabling it multiple times. Tests with other Pixel 3 users on Verizon Wireless have been a success, which also suggests support for Universal Profile is on board. 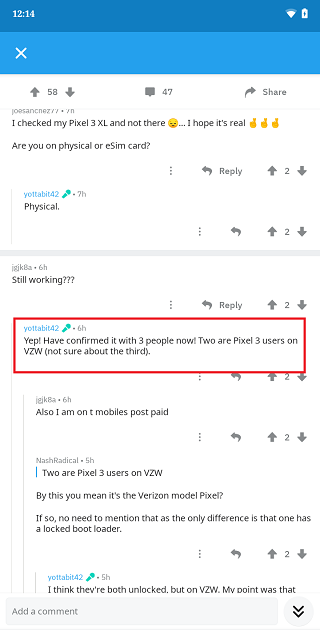 It’s worth noting that not every Pixel 3 user on T-Mobile has RCS enabled, which could also imply that the rollout is staged. Have you received RCS Messaging support on your T-Mo Pixel 3? Let us know in your comments below.

Although not specifically addressing the curious case of the Google Pixel 3 RCS messaging support, America’s four leading carriers have put out a joint statement confirming their support for RCS messaging.

The four have formed a venture called Cross Carrier Messaging Initiative (CCMI) tasked with developing an RCS-based messaging app to be used by AT&T, Sprint, T-Mobile and Verizon subscribers “to privately send individual or group chats across carriers with high-quality pictures and videos.”

The said messaging app will arrive in 2020, but theres no definite date provided. There is more to this story in the press release published here.

Recently, a workaround was found for manually enabling RCS messaging on multiple Android devices. While this hack encountered some difficulties later on, developers have now found another sneaky way of re-enabling the feature on various carriers across the globe. Details here.