Samsung has already started rolling out the latest October 2019 security patches to the Galaxy A50 in some European countries, the first device to get the update, even ahead of industry leader Google and the Pixel phones.

Usually, Google begins rolling out monthly security patches on the first Monday of every month, which means October patches should begin rolling out next week. But Samsung is taking none of that, not just with any of its flagship phones, though.

While the Galaxy Note 9, Galaxy S8 and Galaxy S8+ have already received this month’s security patches in various markets, including carrier-branded models in the U.S., it’s only now that owners of U.S. unlocked models can speak the same language as their counterparts.

The new update is arriving on the Galaxy Note 9 carrying software version N960U1UEU2CSI1 and weighs 272.94MB. This, as you may have guessed, is more than the weight of a typical security update and for sure, the changelog also talks of camera improvements.

Samsung hasn’t gone into any specifics regarding the type of camera performance improvements included in the Galaxy Note 9 September update, so be sure to join in the conversation with any changes you notice in your comments at the end of this post.

For those who own the Galaxy S8 or Galaxy S8+, the U.S. unlocked variants, a similar update is also coming your way. Apart from installing the new September security patch, we still don’t know much about what else the S8 updates bring forth.

The S8 update is arriving as version G950U1UES6DSI1 while that of the S8+ is coming in carrying software version G955U1UES6DSI1. The updates, including the Galaxy Note 9’s, are available for unlocked models used on multiple U.S. carriers.

These are OTA updates and typically, such rollouts take days before all units receive the download notification. The Note 9 update started arriving late last week, but it’s only now that the Galaxy S8 duo is joining in the fun.

Granted, you may have to be a little patient before the update arrives on your handset. Alternatively, you may try forcing the update via the Software Update section in the Settings menu of your device.

NOTE: For more Samsung-related coverage, check out this dedicated section. 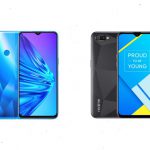