Samsung first introduced a smartphone with a curved screen in 2014 with the Galaxy Note Edge, but the wait for full mainstream adoption went until 2016 when the Galaxy S6 Edge and S6 Edge+ came with curved screens on both edges.

At first, not many bought into this idea. The limited number of applications optimized to work with such screens didn’t help Samsung make its case either, nor did it justify the steeper asking prices of the phones compared to the flat-screen Galaxy S6.

As expected, the Korean tech giant took it upon itself to come up with a bunch of cool functionalities to take advantage of the curved edges and one of them is Samsung Edge Lighting.

As you may have guessed, this feature aims to turn the Edge screen into some sort of notification indicator. That is, when the phone is facing down and you have an incoming message, the Edge screen lights up to alert you that there’s a new message to check out.

For devices like Samsung Galaxy S10 and S10+ that missed out on the LED indicator for obvious reasons, Samsung Edge Lighting can be a lifesaver not just when the phone is facing down, but also when the display screen is off.

As cool as Samsung Edge Lighting might seem, it hasn’t played well with third-party apps on Samsung devices, something that has been ongoing for quite some time now. Matter of fact, this shortcoming has even led to the emergence of third-party solutions to this issue, but in the latest Samsung Edge Lighting update, the company seems to be making up for the lost ground.

With today’s Edge Screen update (v4.0.83), Edge Lightning is properly working as intended even with the screen off! So far it worked with Whatsapp and Telegram.
Source

Arriving as version 4.0.83, the Edge Screen update now has some love for third-party apps like WhatsApp, Telegram, Gmail, Line, and more. If you had installed the Edge Lighting fix app just so as to get the feature to work with third-party apps, well, this might be the time to uninstall it.

So far, the new expanded third-party app support for Samsung Edge Lighting has been recorded by Galaxy S10 users, but it’s likely that other Samsung devices with curved edges are also in line to get this update. 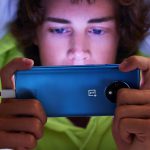