Remember the Parable of the Prodigal Son? You may find the biblical reference at the beginning of software update talks slightly out of the track, but believe me – it is not! Among the US wireless carriers, T-Mobile took that particular designation, at least in terms of camera night mode.

Believe it or not, but every other major carrier except T-Mobile enabled the dedicated night mode in Galaxy S10 camera during July (as part of June security patch update). Neither the OEM, nor the carrier gave any statement regarding this anomaly.

The July patch, which was made available at the beginning of this month, continued the same saga for T-Mobile customers.

Well, finally there is a light of hope. The carrier unlocked variant of Galaxy S10 family with T-Mobile SIM is reportedly getting the July update in the form of build number ASGB, which does include the much-awaited camera night mode.

Funnily enough I was in the middle of setting up Odin and Frija when I decided to check one last time for a update and bam there it was. Was getting really tired of being stuck on May.

Edit: Also has night mode in the camera.

We are still not sure about the arrival of the feature on T-Mobile branded Galaxy S10e/S10/S10+, but at least that’s the beginning!

On the other hand, the unlocked Snapdragon S10 lineup (on non T-Mobile networks) is allegedly getting the August patch – rather quick this time as compared to the Exynos powered global units. We observed this trend with Galaxy S9 and Note 9 family earlier, when carrier variants got delayed OTA.

As you can see, the build tag is this new 217 MB incremental update is ASGF. The bootloader version remains v2 (unlike v3 on global variant).

According to Galaxy S10 owners, Verizon, Sprint and various others MVNOs (including those based on T-Mobile) are delivering this OTA, but T-Mobile itself is sticking with July patch. It is possible to force install by switching to a compatible SIM, but do it entirely at your own risk. 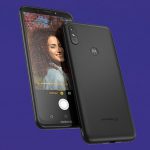 Motorola One Power August security update goes live, but there is a catch (Download links inside)