Asus is no stranger to aftermarket development. Google collaborated with them to make the hugely popular Nexus 7 (both 2012 and 2013) tablets. They are still being used by plenty of people, thanks to their sturdy design and modding friendliness. Besides Nexus lineup, their own Transformer Pad (later ZenPad) series of tablets and Zenfone branded phones gained a huge amount of attraction in the developer communities.

Besides competitive pricing, the availability of kernel source codes and unlockable bootloader played a key role behind the development. As a matter of fact, the Asus Zenfone 2 became the first Intel Atom SoC powered phone officially supported by LineageOS. However, ‘accidentally’ releasing botched up codes is nothing new for them. Asus uses two flavors of Android in their phones. While most of their devices run a heavily skinned version of Android called Zen UI, they started to ship a more stockish form of the Google made OS in few of their Zenfone Max phones.

2018’s Zenfone Max Pro M1, Max Pro M2 and Max M2 were released with vanilla Android on board. The company released Android 9.0 Pie update for them in the beginning of Q2 2019, albeit with some show stopper bugs. On the other hand, the ZenFone 5Z (their flagship of 2018) featured Zen UI instead of stock Android. The Qualcomm Snapdragon 845 powered phone packed some impressive specs, but lost the competition to other OEMs.

Asus rolled out official Pie update for the Zenfone 5Z back in January this year, but the sheer amount of bugs and glitches ruined the overall user experience.

Despite the competitive price tag and truckload of features, the phone failed to attract the aftermarket development community. Asus has also included the phone in the official beta testing of Android Q, but the future does not look very promising. Nevertheless, the OEM wants to wipe out of the shortcomings with the successor aka the Zenfone 6. Besides the regular flagship grade internals, the recently announced phone brings plethora of innovative design such as the flip camera with the Sony IMX586 sensor. The flip camera of the Zenfone 6

Asus also revamped the sixth generation of the ZenUI and removed many bloatware. The skin is closure to AOSP now, which is a huge achievement for stock Android lovers.

We’ve listened to you, and made ZenUI 6 simpler and cleaner with just the essential apps. It’s easier and more enjoyable to use, and the brand-new design gives it a simple look and feel that’s built to let you get things done quicker.

As an addon, Asus has also released the official bootloader unlock utility for the phone. Users with ZenFone 6 (ZS630KL) can now directly download the unlock app from this link.

Although an unlocked bootloader is the primary requirement for modding and custom development, we should remind you that using this tool may void your warranty.

You also acknowledge ASUS does not guarantee service satisfaction to any Revised Product, including events involving paid service requested by you to be performed to the Revised Product.

The OEM also published the kernel source code for the phone, even before the retail availability. The compressed source package weighs less than 200 MB and can be downloaded from here. These codes will help developers to create custom recoveries like TWRP and custom kernels.

FYI, the ZenFone 6 is now listed in Flipkart India’s website. No release date has been officially mentioned so far, although rumors suggest some day in this week. 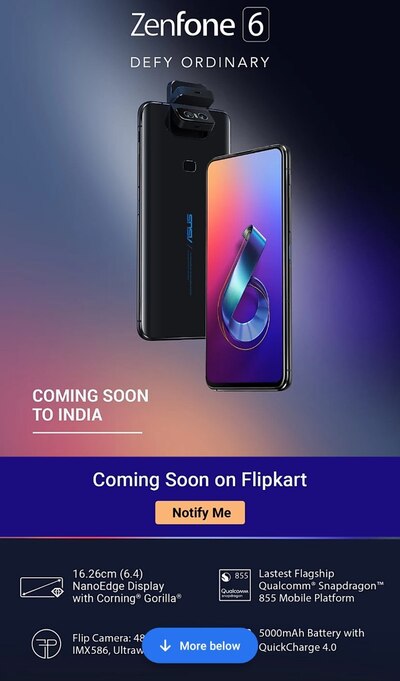 Are you planning to buy the flagship offering from Asus? Let us know by commenting below.