Well, I have something up my sleeve which should reginite the excitement. We will come to that, but first – allow me to talk a little about theming.

Theming in Android is another segment full of fragmentations besides version upgrades. Since its inception, Android lacks of a proper theme engine. Many OEMs have created their own skins on AOSP and come up with corresponding themes. Obviously those could not be considered as universal solution, as they are not interportable. 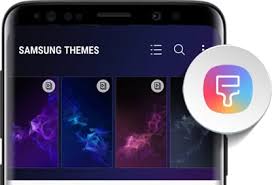 Among them, Sony’s Runtime Resource Overlay (RRO) implementation is a gem of a kind. The theming framework is responsible for Sony’s Xperia Themes.

Sony engineers actually open sourced their RRO codebase and contributed to Google’s AOSP. That is the foundation of modern overlay based theming which is even used by Google in newer versions of Android.

PSA: We still don’t have a **proper** standardized theme manager in Android.

Google removed the app from Play Store for some unforeseen reasons, so interested users need to visit the XDA support thread and grab the APK manually. You need to be rooted for this little app to work though. No hardcoded mode is involved, thus the app can work even after system updates. Dope, isn’t it?

This is not only the topic on OnePlus 6T’s in-display fingerprint today. Yep, the moment of surprise is here!

Readers may remember that we wrote an elaborate article on the situation of custom ROMs and the in-display fingerprint scanner of 6T.

While the codes to handle that piece of hardware are available, the way the sensor differentiates a normal touch vs. a touch intended for unlocking the device is a proprietary mechanism and OnePlus haven’t published it yet.

We reported that developers were working on an open source solution to tackle it. And guess what? It may finally happen! Eminent developer Vache Ounet AKA vache is the official maintainer of OmniROM for OnePlus 6. Based on the screenshot from a Telegram conversation, it looks like he has successfully crossed the hurdle.

While OxygenOS is a great operating system, some tinkers always want to try out something new. As most of the other parts of OnePlus 6T are already working under custom ROMs, fixing the fingerprint scanner will be a milestone.

Talking about OxygenOS, it is pretty much popular among Android communities. The close to stock nature, along with subtle feature additions make it a desirable Android skin.

OnePlus 6 and 6T comply with Project Treble specifications out of the box. It theoretically indicates that one can run extract OxygenOS (popularly called OOS) from these phones and boot it on another Treble compatible device.

Modders did not miss the opportunity, and made it a reality! One of the most popular mods is OxygenOS on Poco / Pocophone F1.

Ported by XDA member CodeElixir, a surprising amount of components are working with this mod. There are some negligible issues with stock OOS camera, as well as the IR face unlock, but the rest work pretty solid.

Unfortunately the developer abandoned the project due to real life duties. We hope he will come back soon, and continues the collaboration between two different worlds (rather OEMs).

With a heavy heart OP has requested the thread to be closed as he would no longer be working on this port.
He may return when he has more time from Real Life.

Till then, Thread Closed on OP Request.

Meanwhile, it’s that time of the year when new phones start popping like mushrooms. Everyone is waiting for the next OnePlus flagship. If rumors are true, then there will be a separate 5G phone as well.

So far, the number of leaks around 2019’s OnePlus phone(s) is very limited (compared to Galaxy S10). That’s why we got curious when this one surfaced on Twitter:

The picture is itself very grainy, compared to other leaked pictures. After zooming it carefully, it can be clearly seen that the button placements are not aligning with the display – in fact, home screen is inverted horizontally!

After reducing the noise and tone down the color, it becomes evident that the picture is modified. The frame has a striking similarity with OnePlus 6T, and the notched section can be noticed with a pair of sharp eyes. Next article Xbox Live down and not working currently, users getting error 8015190e amid outage