Now that Windows Mobile is officially retired, iOS and Android are the only remaining players in consumer smartphone ecosystem. Lack of update uniformity and fragmentations are undoubtedly the Achilles’ heel of the Android community, which are continuously mocked by iOS users.

Android versus iOS software updates revisited: Two years later and not much has changed https://t.co/17UR0951lm pic.twitter.com/c2T9QEwghs

Android does use a modified Linux kernel, but build system and internal architecture make it quite different from a typical Linux distro. Unlike PCs, one can not take a generic image of Android and expect it to boot successfully on a random phone.

Moreover, the open source nature of Android makes it possible for OEMs to insert their own customized features and skins – which delays the update. Google made a significant progress to resolve this cumbersome situation by separating the vendor implementations from the core system. Dubbed as ‘Project Treble‘, this new infrastructural change was made mandatory for devices launched with Android Oreo or newer.

The modularization brought a new revolution in AOSP and custom ROM development. Google also introduced HIDL (HAL Interface Definition Language) as a part of Project Treble. It helps the Android OS framework to talk with low level hardware components in a standardized way. With these improvements, the community quickly came up with GSIs (generic system images) which can boot on different phones from different OEMs – even different SoCs, without any major changes.

Later on, Google officially started to promote the GSIs to developers. On the other hand, the modding communities have made some huge achievements in the same domain: major custom ROMs are now available as GSIs and many older devices are ‘trebilized’.

Huawei has a surprising track record of bringing Project Treble support to it’s pre-Oreo phones. OnePlus did the same with OnePlus 5 and 5T.

We usually shit on @oneplus for various reasons (we also praise them sometimes), but it's really impressive and noteworthy to see them update an year old device to support Project Treble. They didn't have to do this. It shows they're committed to software updates. Kudos @oneplus

The procedure usually involves creating a new/reusing an unused partition inside the device, move the vendor specific codes inside that partition (‘/vendor’) and update the kernel alongside system to align with the changes. 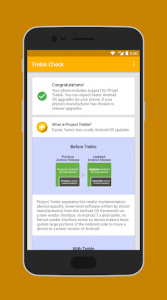 Thanks to the talented developers, numerous other phones got unofficial Project Treble support. Even after being abandoned by the vendors, this ‘trebilized’ devices got an insurance which will cover them with newer Android versions without much trouble.

The newest additions in that list are 2018’s Samsung Galaxy A8 and A8+. The phone duos were announced in December 2017 and launched with almost identical internals. Samsung, being Samsung, shipped them with Samsung Experience 8.5 based on Android 7.1 Nougat.

The phones were later upgraded to Android 8 Oreo but Pie and future updates are quite uncertain, considering they are lower-mid rangers. XDA Senior Member prashantp01 did a spectacular task of bringing full Project Treble compatibility on these phones by modifying the internal partition layout and fixing the kernel for modified /vendor partition. We have seen the same on many Qualcomm based devices devices, but it is the first public example of porting Project Treble on an Exynos SoC based device.

The following models are reported to be working: SM-A530F, SM-A530W (both are A8) and SM-A730F (A8+). Most of the features work out of the box, with the notable exception of VoLTE. On some GSIs, camera access may be broken. The developer provides a temporary fix for it as well. 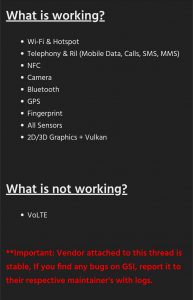 Users need to flash a specially crafted zip for repartitioning and Treble enabled TWRP from the current official TWRP. Major GSIs are working without any hiccups, although Phh-Treble-AOSP is recommended. The phones don’t come with A/B partitioning, thus A-only ARM64 builds will boot on them.

This development opens a silver lining for older Samsung flagships like S8/S7 and their Note counterparts. The Exynos variant of these phones are bootloader unlockable, thus theoretically the same experiment can be expanded on them and the phones will get a new life. You know, testing Android Q before release is thrilling, isn’t it?