There are already a lot of examples that show how poor Tumblr’s implementation of its adult content ban has been. To name a few, posts are being wrongly flagged, users are finding loopholes in the way Tumblr is censoring posts, reviews of the Tumblr app are allegedly being manipulated, and Tumblr’s own examples of allowed adult content got flagged.

Those are just a handful of reports. To get a better feel of how widespread the problem is, head here.

btw @tumblr is now flagging posts as explicit because, and I quite the flagging notice "Somewhere in your reblog there might be adult content".
I could not make this shit up if I tried.
Tumblr is inventing NEW and exciting ways to kill its own website

Even a reblog of Tumblr’s own announcement post was flagged.

@tumblr 's flagging algorithm is so god awful that it flagged a reblog of its own post. pic.twitter.com/v9hdWGO7pR

Among other things, recently users also reported that the appeal button, which one could use in case they felt their post or blog was wrongly flagged as explicit, has been removed.

Tumblr has removed the button that allows you to appeal when its pornbot misclassifies your posts as NSFW https://t.co/eTgUVoPUMd pic.twitter.com/Qq9wvXocSt

alink of lies brought to you by @tumblr:

no one was emailed

there is no appeal buttonhttps://t.co/4WMPMeMubl

so not only does @tumblr not email you (like they sed they would), they even flag posts by hiding them if you aren't on your dash and they "forgot" an appeal button...or visible flag.

one of my art post got flagged on tumblr but there's no appeal button on the post on my dash? So I guess my choices are either leave the ugly warning on my blog and hope they fix this mess, or delete the post forever.
(it's not like I update my tumblr a lot but im still upset)

me: hey could you unhide these posts please?
tumblr support: use the "request review" button on the posts in question
me: ...ok i went to try that but i don't see that option? or even the red banner?? since i can't use that how else can i appeal
support, 18 hrs later: *crickets*

While many are looking for alternatives (here’s our list), a section of Tumblr users have been protesting against the ban. The first phase included logging off from Tumblr for 24 hours, and the recently concluded second phase involved mass tweeting to Tumblr, Tumblr’s CEO, Verizon, and Yahoo.

There’s currently no information on what impact (if at all) these protests have had. 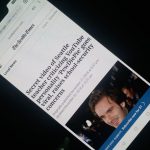 [Jan 20 update] Fortnite friends list and voice chat (mic) not working? Here's what you can do