MIUI 13 update for Redmi Note 8 in the cards, as per a mod comment

Xiaomi is now in its final stages of MIUI 12.5 beta testing and is set to roll out the update for the first set of devices from the next month itself. These include flagship series like the Mi 10, Mi 10T, and Mi 11.

This comes while most of the devices that were promised a MIUI 12 update are now running it effectively. And as many may already be aware, the MIUI 12.5 update has been touted as an intermediary between MIUI 12 and MIUI 13.

Due to this, it was speculated that all MIUI 12.5-eligible devices would automatically be in line for MIUI 13. And although one cannot really be too sure of that, some new info regarding the MIUI 13 update for the Redmi Note 8 does give us a hint on the matter.

Now, the Redmi Note 8 was launched back in and came with Android Pie out of the box. Since then, it has received the Android 10 update and has also already bagged Android 11 in some regions.

Of course, the device is also going through some serious MIUI 12.5 beta testing, just like every other eligible device is, and is slated to bag its first stable MIUI 12.5 build sometime in Q3 2021.

There is also the case of the now neglected Redmi Note 8T that has been left out from the MIUI 12.5 beta testing program for no good reason but let’s not delve into that here.

As already pointed out, it is highly likely that almost every MIUI 12.5-eligible device will also automatically be in line for the MIUI 13 update.

And a recent comment left by a Mi Community Super Moderator in response to a query regarding the MIUI 13 update for the Redmi Note 8 now sheds some new light on the matter. 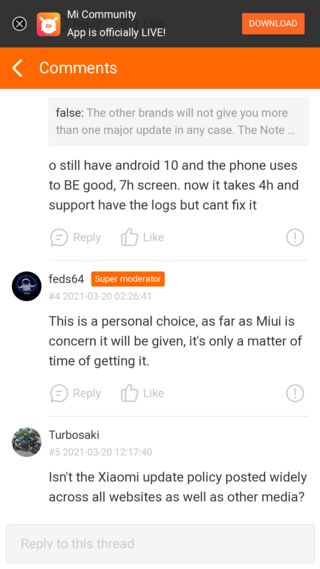 This is a personal choice. As far as MIUI is concerned, it will be given. It’s only a matter of time of getting it.
Source

In other words, the moderator is super positive regarding the eligibility of the Redmi Note 8 for the MIUI 13 update.

However, they’re not too sure about the date of the update’s release which is understandable given that everyone is still clueless about definitive update release dates even for MIUI 12.5 for many devices.

Nonetheless, we shall continue to look for more evidence to keep you posted. Hence, you would want to keep an eye on our dedicated MIUI 13 update info tracker so that you don’t miss out on anything.