LG is one of the most popular names in the tech space. The Korean company has a wide range of products that it is known around the world for, among them smartphones.

Sure, things are not as good in the smartphone business as LG would want. In fact, things haven’t been good with LG Mobile division for years now.

But this hasn’t stopped the company from exploring new avenues to at least bring back its smartphone business on course. The latest attempt to shake things up is the launch of the LG Velvet series of devices.

There are two variants of the LG Velvet – a standard 4G/LTE variant and a 5G model sold across Europe and in the U.S. as well. Having launched this year, the devices have Android 10 pre-installed.

LG did confirm that the Velvet UI that powers the Velvet devices out of the box will at some point come to select devices in the ThinQ family, but it has yet to materialize – at least not for the V35 ThinQ.

You can keep an eye on our Velvet UI tracker to know when your eligible device bags the update here.

Considering LG provides two Android OS updates to its premium devices, both Velvet devices fall into this bracket. It was never in doubt that these two will be upgraded to Android 11 at some point.

But with the failed LG Global Software Upgrade Center, the update was always going to lag behind the competition.

After reports emerged a while back revealing the status of Android 11 update for the LG V60 ThinQ, it is now emerging that LG is in line to begin testing the OS on the Velvet handset as well. The latest development was put forward by the LG-centric publication, MyLGPhones, revealing a banner that indeed confirms the LG Velvet Android 11 update is around the corner.

We couldn’t trace the source of the info, so be sure to take it with a grain of salt. But the publication’s track record means we can as well rest assured that Android 11 is indeed set to begin testing on the Velvet. 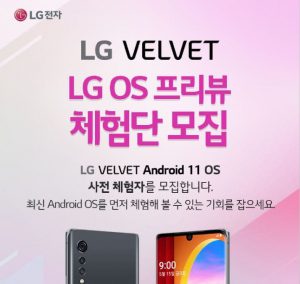 As for the exact release date of the said beta firmware, no one knows for sure. But with the announcement seemingly done, the next phase should be to roll out the update to willing testers.

As usual, we will keep an eye on the developments and let you know when the Velvet bags the stable Android 11 update in more regions across the globe. You can do so too by following this link.

05:05 pm (IST): LG announced the Android 11 Beta Preview for the LG Velvet in Korea and the changelog for it is here as well. (Via)

02:42 pm (IST): LG has finally rolled out the LG UX 10 update based on Android 11 for the LG Velvet following a beta testing period. For full info, check this out.