[Live for Vodafone variant] Xiaomi Mi MIX 3 5G Android 10 update not on cards, but MIUI 12 (Pie-based) could come by September-end Xiaomi is known for updating its devices with new versions of its in-house custom UI, the MIUI, more frequently, than the Android OS updates.

MIUI 12 is a hot topic right now for all the Xiaomi phones, but users of the Xiaomi Mi MIX 3 5G are yet to get their hands on the Android 10 update.

Back in April, we have reported that there are no signs regarding the Android 10 update for the Mi MIX 3 5G, meaning that the update is not expected to arrive, anytime soon.

Well, in a reaction to it, frustrated Xiaomi Mi MIX 3 5G users took to Change.org and filed a petition demanding Android 10 update for the handset. As per current statistics, 1,700+ users have signed the petition, but still, there is no information about the update.

Moreover, taking a look at the MIUI 12 update plan shared by Xiaomi, the Mi MIX 3 5G has not been listed in the roadmap, which is quite weird for several reasons.

Importantly, one, the Mi MIX 3 5G is powered by the Snapdragon 855 processor which is well capable of running anything you throw at it, including Android 10 or MIUI 12.

This only shows the negligence of the OEM towards its phone, or we can say that the company is finding it difficult to maintain such a long portfolio of devices.

However, going by the recent report, a piece of information has come up that might get mixed reactions from the Xiaomi Mi MIX 3 5G users. Because, as per the Xiaomi UK customer support, not Android 10, but users can expect to get MIUI 12 by September-end.

Taking a look at the post, there are several other screenshots shared by the user, that explains that this information is coming directly from the developers.

But, going through the comments section, it came to our notice that one of the moderators has ruled the fact that they haven’t received any word from the developers related to MIUI 12 for Mi MIX 3 5G.

Furthermore, the moderator also points out that the support team might have mixed up information for the 4G and 5G variants.

Here is what the moderator has to say about the information shared by Xiaomi customer support:

We cannot confirm this as we haven’t received any word from the developers. It may be that the support team (as seen in this screenshot) could be mistaken for the 4G and 5G variants to have similar development, or perhaps they actually have an update plan (undisclosed to us).

We had been told the same about MIUI 11 and Android 10 update too, so we’ll have to wait until we get some proper disclosure from the developers. It is too early to confirm anything, so let’s wait patiently. If this is true, then this surely is going to be a great news. Let’s be hopeful.

So, going through all the information we have at hand, it would be safe to say that users of the Mi MIX 3 5G should wait for official information from the developers or Xiaomi itself related to Android 10 or MIUI 12, before getting too excited about it.

As it turns out, the Mi MIX 3 5G will indeed not be getting the Android 10 update. Although, according to an email by Xiaomi’s customer care, it will get MIUI 12 based on Android 9 Pie by the end of October, i.e, a month later than expected. See the full story here.

IST: 11:50 am: Mi MIX 3 5G is now receiving the MIUI 12 update for the European variants. The changelog reads:

If you do not want to wait for the update to arrive, you can manually download the update on the European variant of the Mi Mix 3 5G by clicking here.

IST 06:49 pm: Apparently, the new MIUI 12 update for the Mi MIX 3 5G has disabled 5G support on the device according to some users. At present, Xiaomi has not yet responded to the issue. Catch all the details here

IST 05:38 pm: Xiaomi has now begun rolling out the stable MIUI 12 update for the Global variants of the Mi MIX 3 5G. The update comes as version 12.0.1.0.PEMMIXM and brings a boatload of new features and improvements.

Home screen
– New: App drawer allows you to keep your Home screen neat and categorizes apps so you can find them faster.
Weather
– New: New animations bring the weather from outside directly to your screen.

IST 01:40 pm: It seems that Xiaomi has rolled out the MIUI 12 update for the Vodafone variant of the Mi MIX 3 5G as version 12.0.1.0(PEMEUVF) in Europe. We’ve shared a screenshot of the same below: 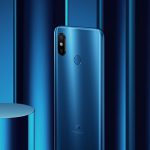 Xiaomi Mi 8 might get Android 11 update, but don't get your hopes too high