Talk about the commitment of delivering the latest Android updates to its devices, even though the world is going through a pandemic for a large number of phones, Nokia has done a commendable job.

The HMD Global owned company has shown great signs and has delivered the latest Android 10 updates to a number of devices this month, namely, the Nokia 3.2, 4.2, Nokia 2.3, Nokia 8 Sirocco, Nokia 1, and Nokia 6.2.

In fact, the company has also released the Android 10 updates for the Nokia 9 PureView in India, and for Nokia 7.2 in the US, this month itself.

Another device from Nokia, which is expecting the Android 10 updates in the coming weeks is the Nokia 5.1 Plus. The device was slated to receive the update in Q2 of 2020 which was later revealed officially by the OEM that the update is coming soon.

Then came in a contradictory report by one of the Nokia chat supports, that the Android 10 update will arrive in May, which almost confirmed that the update is due for release very shortly.

Our regular readers might be aware of the fact that the information related to Nokia 5.1 Plus has been coming out in tandem with the Nokia 8 Sirocco. The internal Android 10 beta was rolled out for both the devices, concurrently, along with a video glimpse of the 5.1 Plus (Nokia X5 in China) running Android 10.

And if we go by the official tweet by Juho Sarvikas, Chief Product Officer of HMD Global, the Android 10 update is almost on its way for the Nokia 5.1 Plus, as the company is fixing one final WiFi issue.

For the Nokia 5.1 Plus owners out there, I wanted to let you know that we are fixing one final Wi-Fi issue and will OTA soon. 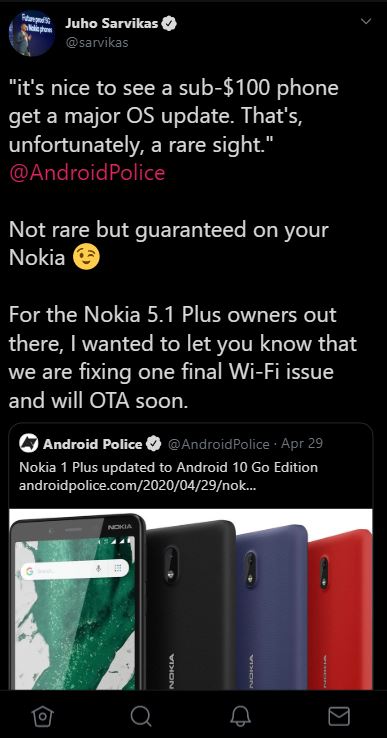 Moreover, the device has recently picked up the April 2020 security patchset and we can expect the next update for the 5.1 Plus to be the Android 10 OS.

Nokia 5.1 Plus users are upset as the update to Android 10 is live for the Nokia 3.1 Plus. Head here for more details.

Android 10 (One UI 2.0) update officially delayed for Samsung devices in India due to COVID-19