We all love new updates on our phones, don’t we? Be it a security update or a firmware update, we all quickly grab our phone and start downloading the update, as soon as it is available.

It’s been more than 6 months since the arrival of Android 10 in the scene, and lately, OEMs have accelerated pushing the OS update for the devices that are still in the pipeline.

Well if you have given a closer look at the names of the devices, mentioned above that have received the Android 10 updates from Nokia, we have already mentioned Nokia 9 PureView.

The fact of the matter is that the Android 10 update on the Nokia 9 PureView has been out since December 2019 for all the units across the globe. But for some unknown reason, the update could not reach the Indian units.

However, things change now, because as per a recent post on the community platform of Nokia, the Android 10 update is finally knocking the doors of the Indian units of the Nokia 9 PureView.

Taking about the update itself, it arrives with the version number V5.13D and also bumps the security patch level of the device to April 2020.  The update sizes at 839 MB. Here is the complete changelog that goes with the update: The update has been rolled over via OTA in batches and will take some time in arriving on all the units. You can keep checking the software update notification, to grab the update.

Since the phone came out in 2019 with Android 9 Pie out of the box, this new Android 10 update would be the device’s first major OS upgrade meaning that Android 11 will be available for this phone. 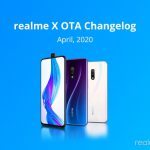