The unofficial update to Android 10 OS is now available for Sony Xperia XZ1, Xperia XZ1 Compact, and Samsung Galaxy Tab A 10.1 (2019) as LineageOS 17.1. Unlike the latter device, though, there is no room for the official Xperia XZ1 Android 10 update.

Sony has already pushed the new OS to nearly all of its eligible devices. It started with the Xperia 1 and Xperia 5 in late 2019 before the likes of Xperia XZ3 and Xperia XZ2 series joined the party.

Going by the two-year software update window, we both know that the Xperia XZ1 and its Compact counterpart are eligible for an official update to Android 10 OS. The duo arrived powered by Android Oreo and have since received Android Pie update.

But in an official roadmap released last year, Sony dropped the two from its Android 10 plans, something that has given birth to a Change.org petition forcing Sony to push the second OS upgrade to the duo as per the requirements.

Until then, you can still get a taste of the Xperia XZ1 Android 10 update right now via the unofficial LineageOS 17.1 ROM. The story is also true for the XZ1 Compact, but as expected, these builds are not stable.

If you own the Galaxy Tab A 10.1 (2019), there is an official update to One UI 2.0 based on Android 10 in the works, but if you are an impatient person who also happens to care less about what One UI 2.0 has to offer, LineageOS 17.1 is also available for your device.

Similar to the Xperia XZ1 and XZ1 Compact, this build isn’t finished, so you may encounter a few bugs here and there. If interested, check out this XDA thread for the download files and installation guide, among other helpful stuff you may need along the way. 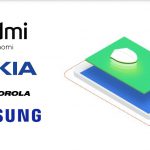