Google undoubtedly invested a lot to streamline the Android update scenario – a particular domain long-dominated by iOS by a large margin. Thanks to the efforts, several OEMs already rolled out Android 10 OTA for their phones besides the Mountain View giant – either via stable or beta channel.

In the public beta testing scenario aka the age of Android Q, Sony also participated and enrolled Xperia XZ3 as the guinea pig. That was kinda interesting, as the Japanese OEM had to choose a legacy flagship cause Xperia 1 was not ready then.

Interestingly, we have yet to see some kind of public testing of Sony’s firmware based on stable Android 10 but the company made significant progress via another path. They recently shared the binaries and AOSP (Android 10) building guide for a bunch of phones via Open Devices initiative.

Guess what? We now have official Android 10 update roadmap for eligible Xperia phones. Albeit not directly from Sony, the list has been posted by NTT Docomo.

According to the charter, the following phones are scheduled to get Android 10 in the near future:

Of course the current agenda is meant for Japanese models, but international Xperia phones should follow the same pattern. We are not sure why Xperia XZ1 family or Xperia 10/10 Plus did not make it, but it could be possible that they will be added later on.

On another note, we discovered a new variant of Xperia 1 – thanks to Google Play certitifaction database. Dubbed as Xperia 1 Professional Edition. The internal model number is J9150 and the size of the display should be 6.5 inches. The phone apparently runs Android Pie and comes with a 6 GB/128 GB configuration.

Now that Xperia 5 is nothing but a ‘Compact’ edition of Xperia 1, the arrival of a ‘Pro’ variant is certainly interesting. Remember, we also have the mysterious Xperia Sprinx in our plate. ?

Sony has launched the Xperia 1 Professional Edition in Japan with revamped calibrated display and ethernet over USB Type-C support. The basic hardware configuration is identical to Xperia 1.

Sticking with their proposed timeline, Sony is now rolling out the stable version of Android 10 update for Xperia 1 & Xperia 5 with November patch. Head over to this article to know more. 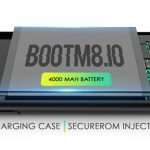 bootm8, a battery case that helps you jailbreak your iPhone, will soon go live