The transition phase from Android Pie to Android 10 is not free from occasional hiccups. For example, Essential had to release a second build on the launch day due to a weird lock screen bug. Weeks later, they again pushed a hotfix update to address the VoLTE related issues faced by various users.

Matter of fact, OnePlus is going through a similar series of events. The Shenzhen based OEM pushed the first Open Beta build based on Android 10 for unlocked OnePlus 7 and OnePlus 7 Pro side by side with Essential and Google. A second update came during the mid of September with truckload of fixes.

Apparently OnePlus seemed confident enough regarding the progress, so they decided to drop the stable version of OxygenOS 10.0 update for the OnePlus 7 family within a few days after delivering Open Beta 2. However, the rollout was officially paused because of a bunch of bugs.

A moderator from OnePlus forum hinted about the tentative timeline of the hotfix rollout – the company should push it after the launch event of OnePlus 7T lineup, so ideally before the end of October. In fact, a new software update is currently rolling across the globe.

The version number of this hotfix is OxygenOS 10.0.1 and it is reportedly available on both OnePlus 7 and OnePlus 7 Pro units. The changelog is nowhere different from the previous one, but the update should feature plenty of under-the-hood changes.

The official announcement thread is not live yet, but we have managed to get our hands on the complete changelog:

Those who already installed the initial OxygenOS 10.0 build are getting a small (less than 110 MB) incremental OTA package. One the other hand, regular users are being greeted with ~2 GB sized update. Judging from the build tag, the hotfix builds were compiled on October 7.

Our collaboration with the Oxygen Updater project allows PiunikaWeb readers to download the full update package(s) without worrying a little. The following section as well as our OnePlus 7 series software update index will be updated as soon as we capture the ZIP files. 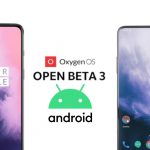