Monthly security patches are very crucial on Android. These updates are meant to protect a device’s operating system by sealing up loopholes in the source code.

These loopholes could have otherwise been exploited by malicious people to harm a device or even access personal data. This is why as soon as the patches are made available, all phone makers begin the ‘race’ to roll it out to their devices.

One such OEM is Huawei. Despite recently falling into issues with the US government and Google, the company is still committed to pushing out updates to its devices. Honor 10, a popular phone from their sub-brand Honor, is now getting the December 2019 patch.

This comes at a time when other devices from the likes of Samsung are already getting the January 2020 patch. Well, better late than never? We think so.

The update brings the software version on this device to 9.1.0358, It weighs in at a modest 268 MB. The changelog indicates that this is merely a security patch and little else.

Android 10 for Honor 10 is well on its way. In the recent past, we have seen the availibility of the public beta in China. Before that, the Indian units of Honor 10 got the oppertunity to enroll for the beta via Friendly User Test (FUT) program.

Huawei P Smart 2019 is also getting the December 2019 patch, albeit on top of EMUI 10. The phone received the stable build of Android 10 back in early December.

As always, the changelog tells us nothing but the obvious:

The other device that is getting updated to the December security patch is Huawei Mate 20 Lite. Matter of fact, the regular Mate 20 as well as Mate 20 Pro received the update on both EMUI 9.1 and EMUI 10.

In case of the ‘Lite’ variant, the OTA appears only on EMUI 10 so far. The phone received stable Android 10 update in November, and looks like Huawei has finished the broad scale rollout.

As you can see, the December patch for this device is tagged with software version 10.0.0.170. Sized a little over 500 MB, it is on the chunky side as far as security patches are concerned. Especially considering that the update doesn’t bring much else in terms of bug fixes.

NOTE: We have these and many more Huawei and Honor stories. 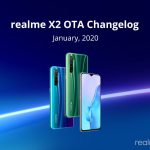