Samsung is planning to revolutionize the world of smartphone photography once again, as the Korean OEM is competing hard against Sony in the new age megapixel race. The upcoming Galaxy S11 will allegedly feature a custom 108 MP sensor (not ISOCELL Bright HMX).

Besides the significant bump in the pixel counts, Samsung is apparently bringing back the long-anticipated ‘Pro mode’ while video recording. There is no doubt that the next-gen Google Pixel will get a touch fight from the Samsung flagship.

The rumored switching from Exynos 990 to Snapdragon 865 SoC in most of the regions should give Galaxy S11 an extra boost in the regular performance. Don’t forget about the pumped up battery capacity, which is indeed a necessary component to drive the beast.

Let’s admit, the back camera bump is kinda funny. From the technical standpoint, the primary camera sensor now requires extra space to accommodate itself (Mi Note 10 is quite thick!). Andrei F. from Anandtech has shared a nice chart of values based on the leaked renders.

Leakster Ice Universe is also shedding some light on the probable pixel binning tech of the custom sensor. According to him, Galaxy S11+ will use 9:1 mapping, resulting a 2.4 uM pixel size. The final image should be 12 MP, but with an astonishing high detail.

Wait, there’s more! The real life camera placement in the ‘Plus’ model might be slightly different from the render published by OnLeaks earlier.

This is the real Galaxy S11+ camera. On the left is the ultra-wide-angle, main camera, and periscope zoom lens. I don’t know the exact distribution on the right. It is expected to include flash and ToF.

Do you think Samsung will ship the symmetrical design as proposed by Ice Universe? Let us know by commenting below.

OnLeaks is back again with another leak, and it seems that the final design of the camera sensor placement is less clunky – just as hinted by Ice Universe.

Next up, the #GalaxyS11Plus…?
It appears the renders I shared one month ago were based upon a first stage prototype which had different rear camera layout.
Here an updated render based upon the latest prototype I got and which depict what I assume is the final configuration… 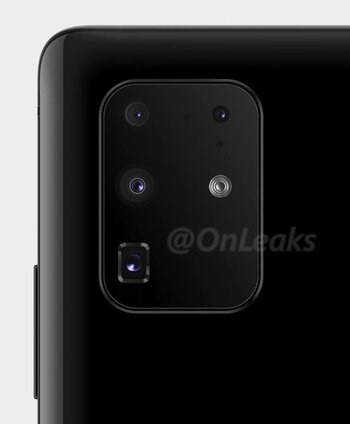