Xiaomi unveiled the Mi Note 3 in September 2017. The device didn’t get a successor in 2018 and naturally, queries started showing up regarding the future of the Mi Note series.

Earlier this year, sometime in June, Xiaomi co-founder Lei Jun revealed that the company had no plans to release a new device in the Mi Note series this year. But seasoned Xiaomi fans will know that there is a certain Mi Note 10 lurking.

Matter of fact, the Chinese OEM will unveil the first device in the Mi Note series in over two years later this month. Whatever inspired the jump to Mi Note 10 is only known to the company, but amidst all this, Xiaomi is still showing some love to the aging Mi Note 3.

It isn’t long ago that the Mi Note 3 Android Pie update was released, the second major Android OS upgrade. Today, we have news of another major update for this device, this time a switch from MIUI 10 to the latest MIUI 11, but still based on Pie.

The OTA update is arriving as MIUI 11 version 11.0.3.0.PCHMIXM and weighs in at 786MB. The changelog is pretty detailed, but that’s what you expect from a major software update that brings new features and UI changes.

Besides the new features and UI changes, the Mi Note 3 MIUI 11 update also brings a new Android security patch for the month of September, up from the August patch that came with the update to Pie.

Below is a summary of the Mi Note 3 MIUI 11 update changelog as provided by Xiaomi.

Comprehensive design optimized for full-screen display devices
– Removing visual clutter, improving touch controls, and refining the use of color allowed us to create the system where nothing stands between you and the content

Sounds of nature
– Wake up to the gentle sounds of nature with our new alarm ringtones
Notification sounds won’t make you tired. Now, they keep changing dynamically, just like nature does.

Note that the rollout has just started and usually, Xiaomi tests the waters with a few units first and if nothing goes wrong, the update will spread out to more users. You can either wait for the OTA download notification or download the update below and install it manually. 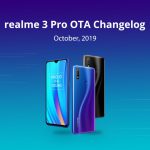